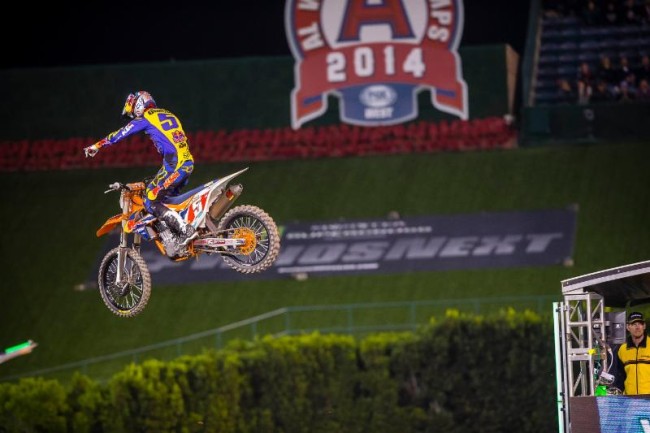 Ken Roczen was the man the beat since the start of the season – until last weekend.

The German came into Oakland  two weeks ago in the points lead and full of confidence, maybe too much confidence. After looking like it was only a matter of time until he passed Reed and then Short for the lead, Roczen went for a triple that wasn’t really on having block passed Reed.

As a result his championship momentum stopped as quickly as his bike upon impact. A fifteenth there was followed up by a subdued fourth last weekend after Roczen got mugged by Tomac on the last lap while he tried to get Seely for second. To make matters worse the race was won by Ryan Dungey, the championship leader.

It leaves Roczen 11 points behind the consistent Dungey having led by 12 two weekends previously. It also coincided with Roczen’s decision to split up with Aldon Baker as his trainer and re-unite with his father who guided him to his MX2 World Championship. But surely that is more an unfortunate coincidence at this stage.

That does however equate to a lot of change in two weeks for Roczen mentally and in his physical routine. And with Dungey coming to San Diego on the back of his first win of the year, this Saturday’s race represents Roczen’s biggest race of the year so far.

Can the German regain the momentum of the title chase to re-establish himself as the man to beat or will Dungey now believe that he can beat Roczen anytime, anywhere.

Meanwhile chasing both men are the hungry Hondas of Eli Tomac and Trey Canard. Each time both riders won a race they weren’t able to capitalize on it the next weekend. Both riders are clinging on to their title dreams at 23 points back and will want to put their stamp on the series as a realistic title challenger.

It is a big week for all four riders who all in their own way need to get a win to establish momentum, but right now it is Ken Roczen who needs it most and it is Ryan Dungey who has the chance to really make himself the man to beat with another assertive win. It’s all to play for in the 450 class this weekend!

When it comes to momentum in the 250 class it is Cooper Webb who has it all. From the moment Jessy Nelson and Justin Hill crashed their way out of the lead at A2 and Oakland combined with Webb’s brilliant come from behind rides. It was clear Webb has everything going his way.

His last obstacle was the aggressive Tyler Bowers but Bowers had his own crash at A3 while Webb won leaving him well adrift of his training partner turned enemy. Webb is aggressive and brash but he has the desire to let nothing get in the way of his goals. Right now it seems he wants it more than everyone else and he has the ability to produce the speed when he needs it too.

Despite only having an eight point lead It is going to take a huge mistake from Webb or a big turn of speed by his rivals to take the momentum away from the Yamaha star, who is now starting to get the credit and exposure he deserves after playing second fiddle in the amateur ranks to the much hyped Adam Cianciarulo.