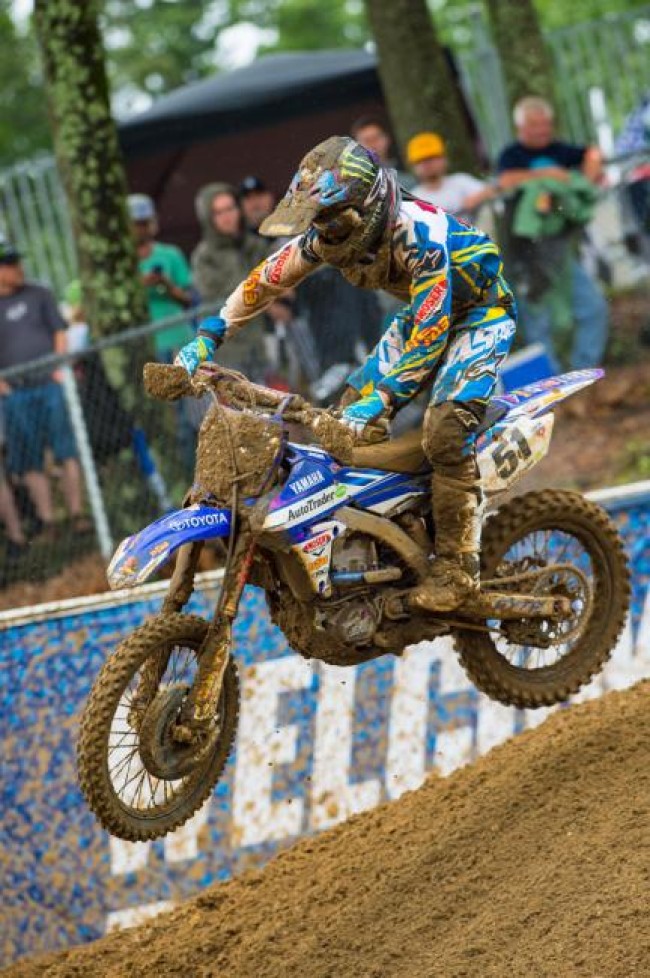 The last couple of seasons have been a struggle for Justin Barcia.

Going into the 2014 supercross season Barcia was supposed to be one of the guys who could challenge Villopoto for the title but it never happened. From his issues with Honda to injuries, then a switch to Yamaha and continued poor results and then more injuries, Barcia has been in a pretty spectacular downward spiral.

But last weekend at Budds Creek, Barcia found some mud, pretended to be at home in New York and walked away with the second moto! The 3-1 results also got him the overall win and the joy and relief was apparent!

The couple of rounds previous Barcia had begun to show some from and was becoming a top three threat. But in the second moto at Budds Creek, Barcia put it all together even though it looked like he was just out practicing at times as he whipped it over some of the drop offs!

Barcia admitted after the race that the mud and the rain made him feel like he was a kid again riding in New York. And maybe with all the stress and pressure of being the next American champion, Barcia had lost the fun aspect of riding. The kid wants to win so badly that maybe he had lost the fun aspect that helped him get so fast to start with.

Another aspect of his improvement could be his riding style. Barcia has always been too aggressive ( even for the US style tracks). Slamming into berms and using the throttle as a switch while constantly being on the clutch. The ‘slow down to go faster’ mantra has never got through to Barcia.

But his new coach, Buddy Antunez, is trying to get Barcia to shift earlier and use the clutch less to help smooth the American out. If Barcia can adapt to a smoother style it could be the missing link to winning some titles.

In fact, I believe a couple of seasons in the World Championship would help smooth Barcia out even more and he would go back to the USA a much improved rider.  As we saw with Villopoto, grabbing handfuls of throttle doesn’t work on many GP tracks and Barcia has already admitted learning from Cairoli at the MXDN in Germany and that he would like to race MXGP in the future.

He is smart enough to learn but stubborn enough to keep trying it his way ( especially when it can work sometimes in the USA) but in MXGP Barcia would have to learn to be smoother than ever if he wanted long term success, but I believe that would help his career in the long run.

With Yamaha currently leading the World Championship the bike itself is proven, but Yamaha are still trying to get over the ‘bad 450’ perception in America since the James Stewart days. So it was good to see the bike finally get a win with a rider who appeared, at least initially, to be struggling to adapt to the bike. This could be another sign that Barcia is opening his mind to change and becoming more adaptable.

So, the question is has Justin become more open minded in the last few months? Has he been able to adapt to the Yamaha and change his style for the better? Or did he win just because it was muddy?

Time will tell but I think this was a turning point in the season for Barcia and the JGR team, especially going into the 2016 season. Barcia is coming back to his best and has figured out the bike, he just needs to keep learning to be smooth!