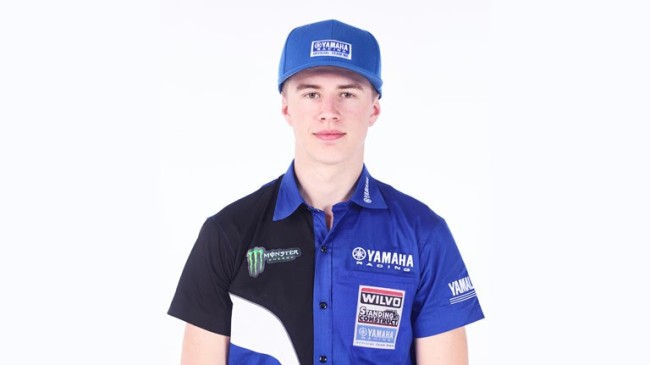 Alvin Ostlund has signed for Standing Construct Yamaha for the 2016 season. He will contest the entire MX2 World Championship after it emerged that Julien Lieber will not be back for the first round of the championship.

Alvin had originally planned to contest the EMX250 championship this year with DP19 Yamaha but he has now got an offer he couldn’t refuse.

The Swedish rider finished fifth in the 2015 EMX250 championship in what was his rookie year – he was the best rookie after Brian Hsu picked up an injury.

Alvin now has another rookie year ahead of him in the world championship in what will be a learning year for him!

Alvin Ostlund – “Yes it comes like a suprise for me! I was training in Italy and Yamaha call me and ask if I want to do this because Julien Lieber has some problem! And of course it’s not easy to say no because it’s a big chance for me! So I go to Spain directly after the second round of the Italian championship for testing! I love the bike from the beginning so looking forward to the season.

Tim Mathys –  I noticed already Alvin when he was riding EMX125 in ’14, last year he surprised me in his first year in EMX250. As Yamaha asked us to put our focus on the World Championship MX2 it was not possible to have in him our team as we already had two riders with  Tonkov and Lieber. Unfortunately Julien’s injury seems to be worse than we thought so we had to look for a replacement rider because our partners wish to have a minimum two riders at the gate. I thought immediately about Alvin and after some talks with Yamaha and David Philippaerts from his DP19 team it was decided that Alvin would ride GP’s for our team. We expect one thing of Alvin and that is that he gives it a 100% effort. We don’t expect any results of him, it is his learning year and Alvin is a rider for the future. We don’t know when Julien will be back but we support his idea to come back when he is 100% and we will continue the season with three riders once he is back!

Louis Vosters – Co-owner Wilvo Standing Construct Yamaha Official MX2 Team – “It’s unfortunate news that Julien Lieber needs more recovery from his injuries and won’t be able to start the season in time, so we are really happy to have this opportunity to welcome the young and talented Alvin Ostlund to our team for 2016. He has already raced EMX250 and was 5th last year, so the transition to MX2 will be a big step but not too big for him. For Wilvo Standing Construct Yamaha we see a chance to build a long-term relationship with a young rider and will be very happy to see him in the Top-10 this year.”

Alberto Barozzi – Yamaha Europe Motocross Racing Manager – “A difficult situation arises when a rider’s health is not at the top level, and there are many complications when we approach the first race of the season with some question marks on the final roster. The graciousness and tremendous fair-play done by David Philippaerts and his DP19 Yamaha Official Team to accommodate this change at such a late date in the pre-season calendar really reflect a champion’s character, and on behalf of Yamaha Racing we thank David and everyone at DP19 for their teamwork.”

BIG NEWS! I got the opportunity to go to wilvo standing construct for the whole mx2 Word championship this year! Big changes but im really happy! I want to say thanks to the whole @dp19racing team for the time we have😃