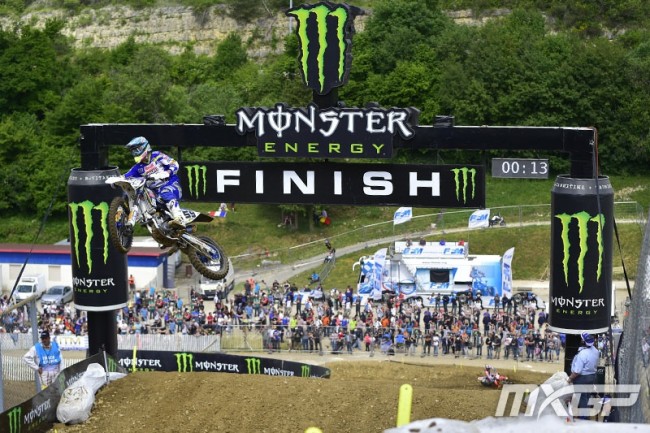 One of the most exciting riders in the MX2 class of MXGP – Aleksandr Tonkov – will next year be in Standing Construct Yamaha Yamalube ‘blue’ and armed with a YZ250F for what will undoubtedly be another thrilling campaign watching the slight Russian push the limits of speed and performance. The Belgian team reached an agreement with the 23 year old who will step onto the pegs vacated by Valentin Guillod for 2016 with the Grand Prix winning Swiss remaining with the Yamaha crew but moving into the MXGP category with the YZ450F.

Tonkov initially steered a YZ250F at the beginning of the decade and his first laps and outings in the EMX250 European Championship. He now returns to the brand after having learnt and developed in four seasons of Grand Prix and having obtained several podium finishes. He also starred at the 2014 Motocross of Nations in Latvia. ‘Alex’ had been challenging for moto victories in 2015 – obtaining his first in the mud of Maggiora – until a crash disputing the lead at the Grand Prix of Germany this summer led to a shoulder injury and counted him out for the rest of the term.

Now recovered and entering his preparation phases for 2016 he has a fresh challenge for what will be his last in the MX2 division before he hits the age ceiling of 23. “The last two seasons have been good for me but not great and I really feel a strong connection with Standing Construct Yamaha Yamalube and I believe it is where I need to be to go to the next level,” he said. “I know together we have a great chance. I know it will not be easy at all to go for the top but with such a strong crew behind me I do know I will be ready for the challenge.”

“Aleksandr had a good feeling with Yamaha before and he was happy when we spoke with him for 2016 because he had planned to approach us! I think he is a rider that has developed a lot and is an exciting prospect,” commented Team Owner/Manager Tim Mathys. “We know he has the potential to be in contention for wins and podiums right away. It is another strong sign for our team that riders of his calibre want to race for us and be a part of what we are developing with Yamaha.”

“With Valentin moving to MXGP for 2016 we’re excited that we could secure a strong rider like Aleksandr to join the Standing Construct Yamaha Yamalube team,” said Yamaha Motor Europe MX Manager Erik Eggens. “He took his first moto win this season and showed that he is one of the fastest in the class. Together with Julien on the YZ250F it means we can again count on strong presence in MX2 and expect to be pushing for some great results.”