A weekend to forget for Kemea Yamaha! 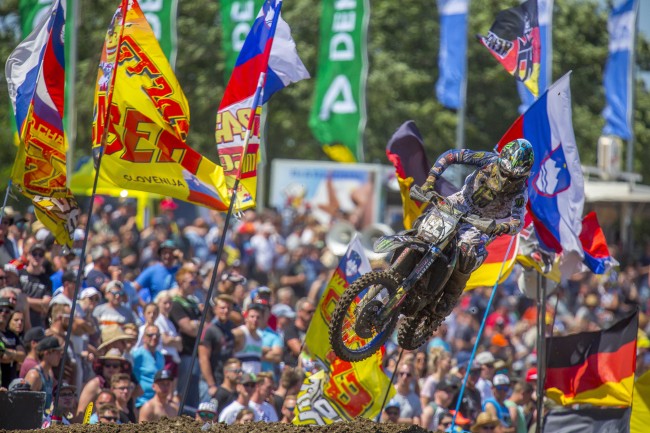 Almost everything that could go wrong, went wrong for the Monster Energy Kemea Yamaha Team in Teutschenthal, where round 10 of the FIM World Championship took place. Ben Watson suffered a broken hand on Saturday and had surgery on Sunday morning. Jago Geerts had a DNF in the second race, due to an electronic problem.

The weekend started with a big bummer for the Monster Energy Kemea Yamaha Team. Ben Watson lost balance during the free practice on Saturday and was thrown over his handlebars. The crash resulted in a fracture to his left hand (metacarpal bone). Watson immediately returned to his doctor in Antwerp, Belgium and already had surgery on Sunday morning. An update on his injury and his return to racing will be published when available.

BRUTAL
Jago Geerts didn’t feel comfortable on the Talkessel circuit all weekend long. The Belgian struggled in the deep ruts and on the brutal bumps, had a big crash in time practice and only managed to finish tenth in the qualifying race on Saturday.

Geerts seemed to feel better in the first race on Sunday. He got a pretty good start on his YZ250F and moved up to fourth place after only three laps. Unfortunately, Jago lost the front wheel on a wet spot and fell back to 15th place. The Belgian regrouped and managed to come back to ninth place on the difficult and tricky track.

Like in the first race, Geerts got out of the gate pretty quick in race 2 and was already in third position after four laps. But bad luck continued to hit the Monster Energy Kemea Yamaha Team. An electronic problem ruined Geerts’ podium ambitions halfway the race. DNF and zero points. Despite the bad luck, Geerts is still third in the World Championship classification.

“I didn’t feel comfortable at this track. It started with a big crash during time practice on Saturday and ended with a DNF in the last race. Frustrating, because I could have finished in the top five in both races. So, this is really a disappointing weekend for me. The issues we had are unfortunate, but they are part of the sport. I’m glad that I can go home healthy.”

“This was a terrible weekend for our team. And especially for Watson. Ben broke his hand and had surgery one day later. Let’s hope that he can recover quickly. Also Jago had his problems. He lost a lot of points because of a mistake in the first race and a bike issue in the second race. That’s difficult to accept after three podiums in a row. There’s only one option: keep on working hard.”