A quick chat with Tim Mathys 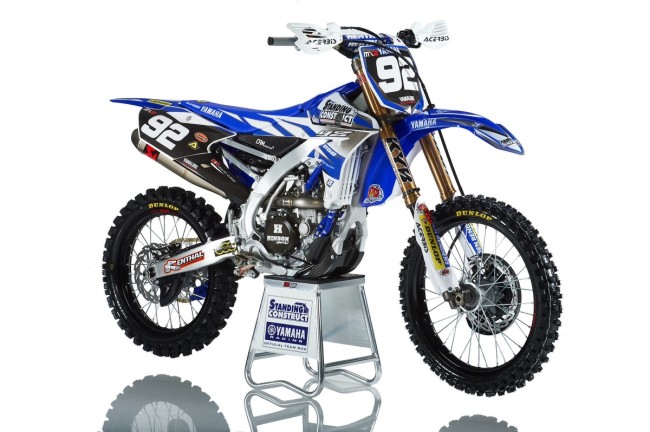 One of the most improved teams over the last few years in the world championship paddock has definitely been the Standing Construct team. Last year they signed the 2013 European champion, Valentin Guillod and helped take him to the next level as he had an impressive season last year in MX2 as he finished seventh in the world championship. The team also signed the fast Belgian, Julien Lieber for the last two GP’s of the year when he left Suzuki and he showed some tremendous speed on the KTM. However, before this season the team got an offer that they could not refuse as they will now be the factory Yamaha team in mx2.

Gatedrop caught up with team manager, Tim Mathys to get his thoughts on the season ahead.

Gatedrop: How hard has it been to switch brands and develop a new bike?

TM: “It has not been easy, a new bike = new problems. With the KTM we knew what to modify, with the Yamaha we had to find that out. We spent hours and hours on our dyno but it looks like we have a fast bike again”

Gatedrop: Has being a factory team always been a dream for you?

TM: “For sure it makes life easier”

Gatedrop: Did you expect Julien Lieber to be so fast straight away last year?

TM: “Yes, it was clear to me that he was fast but that his bike was the problem”

Gatedrop: When you signed Julien Lieber you had to let go off Damon Graulus, what that a difficult decision as you have worked with him for a number of years? Also, do you think he will surpise people this year?

TM: “Very difficult but Damon got all chances, maybe new entourage can reliance his career. I hope for him”

Gatedrop: Would you say heading into this season that this is the best rider line up you’ve ever had?

Gatedrop: Valentin Guillod has really improved the last couple of years, what is the secret and do you feel your team environment has helped him progress. What are your goals for him this year?

TM: “We listen to his needs and wished and try to fulfil them”

Gatedrop: With Jeffrey Herlings coming in with lack of preparation this year do your riders feel wins/podiums are more realistic?

TM: “We have two riders capable of doing top 3’s but there are a lot of fast riders in mx2 who can get podiums”

Gatedrop: Thanks for your time and good luck for the season!