A quick chat with Nathan Renkens! 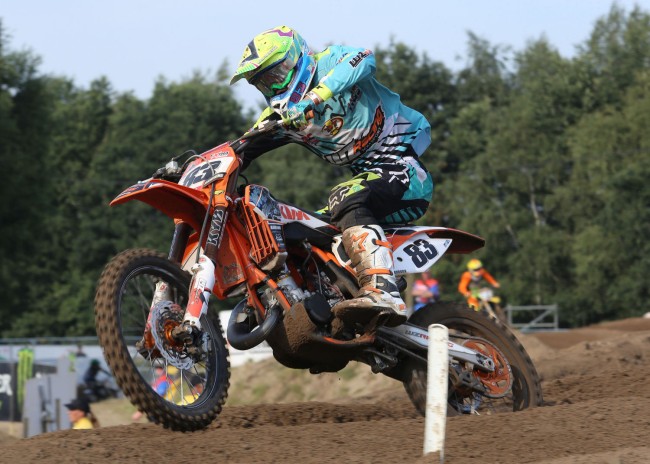 It has been a good season for Belgian rider, Nathan Renkens! Nathan contested the EMX125 championship and ended up an impressive seventh in the championship.

Towards the end of the season he started to ride the 250cc more as he is a bigger guy and it looks as though he will suit the bike better so we may yet have seen the best of him. He contested the EMX250 round in France and finished eleventh overall in his first 250 race which is a good result, with a full off season to prepare on the 250 he could be one to watch.

Nathan was able to end the season on a high note as he won two out of three motos at the Coupe de l’Avenir and that helped Belgium win the event. Nathan was impressive at the event,  he beat Alvin Ostlund who has had an impressive season finishing fifth in the EMX250 championship as a rookie.

We caught up with Nathan to discuss the Coupe de l’Avenir and his season – keep an eye out for him in future!

Gatedrop: Belgium won the Coupe de l’Avenir and you won the overall.. How does it feel?

Nathan Renkens: Yes already Saturday after qualifying the Belgian was favorite but I really did not think I was going to be the fastest on Sunday.

Gatedrop: Belgium where heavy favourites to win before the event, you seemed to handle the pressure well?

Nathan Renkens: It was more pressure for me because I had to show on Saturday that I was the fastest Belgian and I wanted to do the same on Saturday.

Nathan Renkens: yes, I thought it would be a tough start with 250, but from the start I showed that I was easy on the bike and I had a very good speed.

Gatedrop: You must have been happy to beat Ostlund, he was fifth in EMX250 so shows you have good speed..

Nathan Renkens: Yes, I knew it was my best competition, just by seeing his season pass I had the first and friesian. In the 2nd race we did not meet on the track and battle. However, in the 3rd race it took a good start and that’s what I done. I managed to take the lead and finish the moto in first place to take the win! However, Ostlund was not far behind me so I pushed and pushed to win, we stayed the same distance for the entire moto. It was a tough 3rd moto, but I showed that I had a good speed.

Gatedrop: With a pre season on the 250 you must be pretty confident for next year?

Nathan Renkens: yes, it is true that I have not had a lot of practice with the 250 but it is looking promising for next year.

Nathan Renkens: yes, I have outgrown the 125 so we have to start on the 250 for next year.

Gatedrop: Going back to this year, you had an up and down season.. Where you happy with how the season went?

Nathan Renkens: yes it’s the most beautiful season of my career even though I missed some races this season with injury but I gained a lot of experience.

Gatedrop: You seem to be stronger in sand than hard pack, do you think you need to improve your hard pack riding?

Nathan Renkens: yes, I think I’m faster in the sand, but I know I have a lot of work for the future, in the sand and hard pack!

Gatedrop: Before the season did you have a target for the season and did you meet that target?

Nathan Renkens: We didn’t really have an objective, I would give my all every time I went out on the track!

Gatedrop: What are your plans for the 2016 season?

Nathan Renkens: Next year I will do the emx250, ADAC (German championship) and some MX2 GP’s with my team WZRACING.