A quick chat with Jack Bintcliffe! 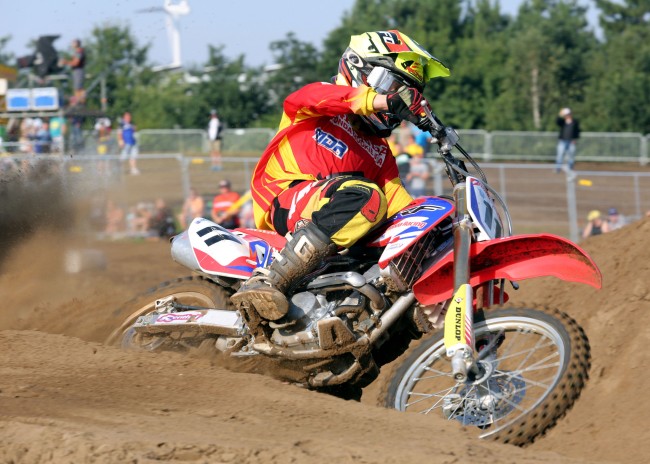 One Brit has already won the EMX150 championship as Albie Wilkie won the title last year which meant he secured the ride in the EMX250 class with JTech Honda. Another British rider could end up winning the title a year later as Jack Bintcliffe is now only two points of Emil Weckman who holds the red plate going into Assen which is the last round.

Jack has surprised many people this year as at times has been the fastest in the class which is impressive considering it’s his first year in the class. Jack put on a wonderful display at the last round in Lommel as he won the first moto by a massive twenty-two seconds and won the second moto after a crash set him back.

It is pretty hard to believe that Jack only started racing motocross two and a half years ago, the progress he has made is outstanding and he is certainly one to watch for the future. He is also working with Richard-Mike Jones who seems to be getting the best out of him.

We sat down with Jack to talk about his season so far and plans for the future!

Gatedrop: You must be really happy with how Lommel went for you!

Jack Bintcliffe: Yeah I was really happy. It was also great to be part of all the British winners at Lommel.

Gatedrop: When did you learn to ride the deep sand? You were brilliant out there!

Jack Bintcliffe: I first learnt to ride in deep sand and mainly practiced in my first few months of riding on sand tracks.

Gatedrop: The sand tracks in the UK must help you prepare for the sand races..

Jack Bintcliffe: I ride Fat Cats practice track a lot and that gets very rough and deep. I love the sand most.

Gatedrop: It looks like you have a better chance that ever to win the title!

Jack Bintcliffe: I went into the Championship having no idea on how I would do. I trained all winter on a 150 Standard Honda to prepare myself and that has helped me a lot.

Gatedrop: Heading into Assen will the mentality now change and you will be going for the two wins?

Jack Bintcliffe: I don’t know what Assen will be like yet but I am hoping its sand. Either way I will be giving it my all and going for the wins and to win the Championship.

Gatedrop: Before the season did you expect to be battling for the championship?

Jack Bintcliffe: No, not at all. As most of the top riders did it last year and have a year’s experience and they have a knowledge of the tracks already. Nothing has phased me though, I have got on with my job and its working for me.

Gatedrop: I believe this is only your third year racing motocross?

Jack Bintcliffe:  Yes, I started two and a half years ago, in March 2013 as a complete beginner. I took to the bike straight away and my coach RMJ has helped me achieve so much in a very short time.

Gatedrop: You must be happy with the progress you have made in two and a half years?

Jack Bintcliffe: Yes I’m very happy.  I won my first UK national BYN race in my first year and lots of races in my 2nd year and I also currently lead the MX Nationals going into the last round. My first year of doing Europeans I have won 5 races. I can’t have asked for much more really

Gatedrop: Are you currently studying?

Jack Bintcliffe: I do home schooling, although I train not only on the bike but with my fitness too. This means that my schedule is very full, so I have put my GCSE’S on hold until I have the time to do them properly.

Jack Bintcliffe: All I can say is that I will be on a Honda 250f.  I will be competing in the Maxxis MXY2 and maybe the EMX 250 to test the water. Watch this space!