A positive day for Hakon Osterhagen in Spain 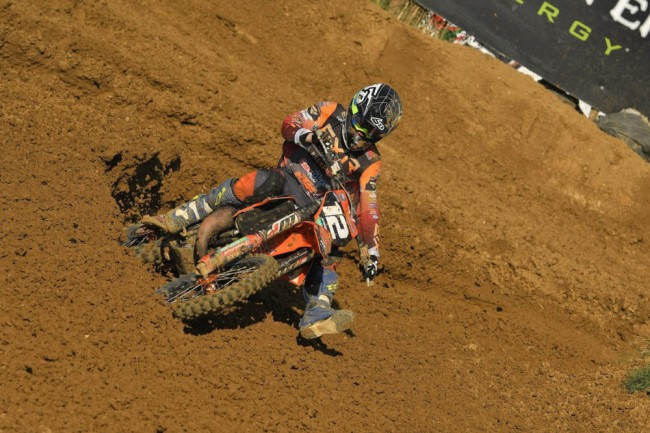 The CreyMert Racing team headed to Spain for the sixth round of the EMX125 championship and will be happy with how the day went. The event was held at a new track of Arroyomolinos and Hakon Osterhagen didn’t take long too long to learn the circuit. The Norwegian went 8-14 in the moto’s for eleventh overall just missing out on the top ten but it was a good day for Osterhagen who’s had some bad luck lately. It was Andrea Bonacorsi who took the win and extend his championship lead.

The morning went well for Osterhagen as he was third quickest in free practice and then seventh in timed qualifying to give himself a good gate pick for the races.

Osterhagen was able to make good use of his gate selection as he took a good start in the first moto inside the top ten, he’s been struggling with his starts lately but it always makes things a little easier. The Creymert KTM rider was ninth after the first official lap and ended up finishing a solid eighth but was locked in an exciting battle for fifth with five riders involved. It showed that Osterhagen had good pace and could also take a good result.

Unfortunately, in the second moto, Osterhagen couldn’t replicate his start from race one as this time he was in fourteenth after the first lap. The 16-year-old did start to move forward and got himself up to tenth and in a strong position for a good overall finish. However, on lap nine things went wrong as Osterhagen crashed and fell back to fourteenth which is where he finished. Despite a frustrating crash, Osterhagen can be happy with his speed and after finishing eleventh overall at Spain he now sits fifteenth in the championship standings.

The EMX125 championship continues next week at the rough sand track of Lommel which will be a test for all the young riders but one the team and Osterhagen look forward to.

Osterhagen: Well I started the day of good with P3 in free practice and P7 in timed practice. Race 1, I had a pretty good start around 5th I think. But dropped down to P8 and was there the entire race with some battles between P7 and P10. The track was awesome with deep ruts and jumps. Race 2, I really don’t know how but my clutch at the start got stuck. This is the first time in my life something like that had happened. But I was actually happy with my speed and was riding to get back up to 10th. Unfortunately I crashed and dropped down to 16th but my riding got me to P14. For the day I was P11 overall.