A fifth place moto for Locurcio while Goupillon injured 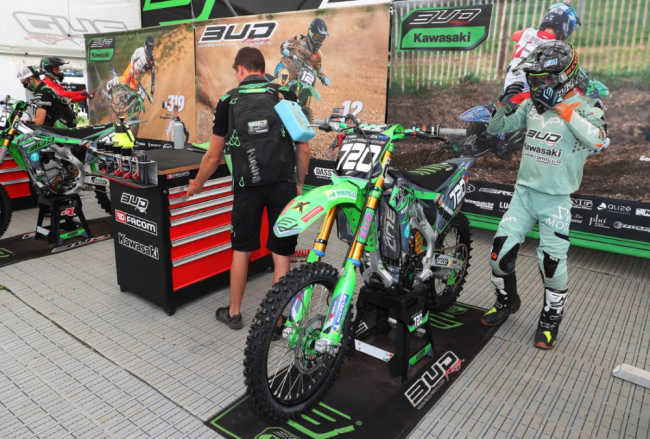 BUD Racing Kawasaki’s Lorenzo Locurcio raced to a career-best fifth-placed moto finish in the third round of the FIM European EMX250 Motocross Championship at Kegums in Latvia.

The Venezuelan is still adapting to the European racing format and improved his qualifying result with a twenty-first position, but he cleverly avoided the regular first-turn carnage at the loose-surfaced track in the opening moto to complete the opening lap thirteenth and immediately started making moves to already advance into the top ten after five laps. Continuing his move up the leaderboard with a succession of impressive laps he eventually took fifth position, not far behind the rider in third. A similar start in race two saw him complete the opening lap in sixteenth position but the expected surge through the pack was halted a lap later when he was unable to avoid another rider who got out-of-shape in his path. Rejoining the race a lap down with no chance of points he took the opportunity to race with the leading group to prove his pace.

Lorenzo Locurcio: “I learnt a lot today for sure. First moto I got a decent start and made my way up to fifth; it could have been fourth but the track was tough today, slicker and more sharp edges; I just made too many mistakes at the end to make it stick. I got away mid-pack in race two but another guy messed up; I had to check up but we touched in the air and we both went down. I got up and started to catch up but unfortunately I went down again. I was a lap down so I joined in with the front guys for practice and passed a few of them so that was good for the confidence. “

BUD teammate Pierre Goupillon started the day confidently with fourth-best qualification lap and he quickly settled into a leaderboard pace to move solidly from an initial sixth to fourth by half-distance. Five laps from the end of the moto he was rapidly closing down the rider in third when he misjudged the take-off of a rutted jump and crashed out of the race. The French youngster suffered a dislocated hip and did not start race two.

The European series continues at the same venue on Saturday, but tomorrow sees the stars of the world series take to the track again for their second of three GPs in the space of eight days at the Kegums facility.