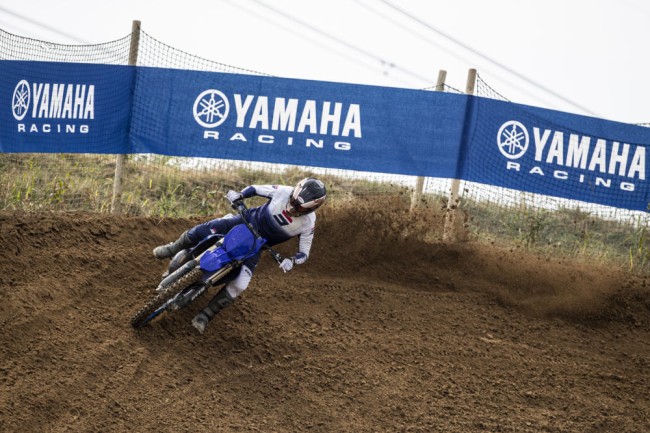 Gate Drops test rider Tristan Young has been at home, in England, riding bikes and climbing mountains all over the summer, so we called him up for his second bike test with us. Thanks to Yamaha Europe, we were able to try the all new 2022 Yamaha Yz125 and Yz250 in Dorno Italy.

It’s been three months since my last bike test and I was so excited when I found out I would be able to ride a MOTOCROSS bike around a perfectly groomed track in the north of Italy.

The YZ125 has seen some huge changes for 2022 and the first its had for a long time. Almost every functional part of the engine is new, from the cylinder, cylinder head, piston, piston pin, con-rod, crankcase, exhaust to a revised cylinder port shape and updated cylinder port timing

The first thing you notice on the new Yz’s are the shape, its changed significantly but you’ll see two big air-intakes towards the rear end of the seat. This is to feed the new engine with more power, along with a “flat” seat that sits 6mm higher than the previous model. Having a new engine that produces more speed, better stopping capibility is needed. Yamaha haven’t over looked this either and increased the size of the front pistons, adding rigidity to the calliper and giving it a redesigned 270mm rotor.

Back to 2022 Yz’s shape you’ll be aware the rad-scoops have changed for some good eye candy, also the top of their rad finished lower than the 2021 Yz. Yamaha have made the 125 more powerful from a standstill, they have done this by adding a VForce 4 reed which marries up with their Keihin carb.

First up for me was the Yz125, as soon as I fired up the small bore 125 she instantly came alive. First lap on the bike was steady learning the track, once that was over I fell in love instantly. This little bike provided so much power, I felt like I could hit anything and put it anywhere I wanted every lap. It did however, take a lap or two to feel out the gears as I don’t ride 125’s often but once that was sorted I could really feel at one with the bike. In the softer sand of Dorno it was important to be in the right gear, on a hard pack track I can see it being easier to ride with less gear changes and more clutch.

On the suspension side of life, I found with my weight the front forks assisted my riding style and being an enduro rider I liked the way they felt. However to a motocross rider I think they would want them a little harder, as I’m sure a motocross rider would feel they were diving under hard braking, but to fix that its simple. I’d suggest a few clicks stiffer on compression and this will improve them but if your a serious racer i’d recommend to get the bike professionally set up to your weight with changing springs and revolved correctly.

If looking to go racing week in week out and are serious about 125 racing then find your local Yamaha dealer and buy a GYTR kit for your new Yz125, the kit includes cylinder and head, piston, full exhaust system, ignition, KITE wheels, GYTR ignition and clutch cover. It’s a phenomenal bit of kit that makes your 125 feel like a bullet.

People get the wrong impression about ‘tuned’ motors, thinking that they will be awful to ride and too snappy with the power delivery. However, the guys at Yamaha have spent a long time developing this kit and it’s the complete opposite. It makes the bike easier to ride with having more bottom end power. I could switch off more as I didn’t need to be thinking as much about getting in the right gear in the softer turns as with a little bit of clutch it would fire out and then keep on pulling longer in gears down the long Dorno straights.

The power delivery was continuous throughout the range and I feel as though I could ‘attack’ tracks easier. I quickly learnt that in some spots the track has nice inside lines I could use as the bike had explosive power throughout and would get me to the next corner or jump just as quick as the stock bike would around the out side. Another great thing about the GYTR bike is it allowed me to hold the gears longer before I thought about shifting up.

Not only does it turn your already fast YZ125 into a small fire breather, you’ll also have everyone listening out for you with its awesome crisp sound. I’m getting excited typing this up and I can’t wait for my next chance to rip on one of these beasts.

The 2022 YZ250 doesn’t look any different to the Yz125, its had all the same look and design minus the much bigger 250 2 stroke pipe. Its got the same air intake at the rear of the bike for a stronger flow too. Little off subject but really interesting, the Yz250 is the “longest” running 2 stroke MX Model and Yamaha have produced a Yz250 since 1974. For me that was just incredible!

Back to the bike, if you remember my previous bike test I explained I wasn’t a fan of the bigger bikes, however I did like the slimmer design. A slimmer bike feels so much better when cornering as you can really grip with your knee’s and let it do its thing.

First impression was this bike is fast. But jumping from a Yz125 to Yz250 it was expected but the bottom end was much more user friendly and once you hit the mid and top end of the power band is was wild, but overall you could  hold gears longer. The KYB front forks can’t be beaten so once they are set up for you then you’ll never want to use anything else. On corner entry I found the 250 really nicely planted and would go where I pointed it and stop in time, as its been given some front brake mod’s with bigger pistons and a longer lever for improved feel.

I had a chance to try the 250 GYTR version which performance-wise is just a full exhaust system, with the bike already producing enough power Yamaha didn’t feel the need to add anything else to improve it. They were right aswell, the pipe made a huge difference. It went from “FAST” To REALLY FAST!!!!! With my first lap on track I overshot most berms and jumps, but the suspension took it really well, and once I felt more at home “scrubbing” jumps harder. Using the new 270mm rotor to stop instantly for corners this bike was a real mans bike and so much fun in the softer sand.

I enjoyed how light the 250 feels for a bike with so much power, its easier to square off corners and if you’re feeling fast enough you’ll be able to dance with the Yz250, throwing some big whips and scrubs. With not being a big bike guy I felt Yamaha had yet again made it feel safe to ride, I didn’t get out of shape . I feel for a less capable rider Yamaha have produced a fast and user friendly bike for all levels.

Yamaha have officially brought up to date in 2 stroke department and filled a gap in the market to offer a competitive and modern 2 stroke. The 2022 improvements speak for themselves. They have gone to town with the 125 making it a powerful, nice fun bike or add in the GYTR kit and build yourself a race bike.

Yamaha have priced this bike well i’d say by making it better, using stronger parts too. I think they have kept the price fair in the current climate. Prices will change Subject to your local dealer.

All the Yamaha bikes are available in stock Yamaha colours and they also come in the Monster Energy Yamaha Racing Edition colours which is pretty awesome if you look at Glenn Coldenhoff, Ben Watson and even Dylan Ferrandis AMA Pro Motocross Champ.

Remember to let us know what you think of the 2022 Yz’s if you buy one.