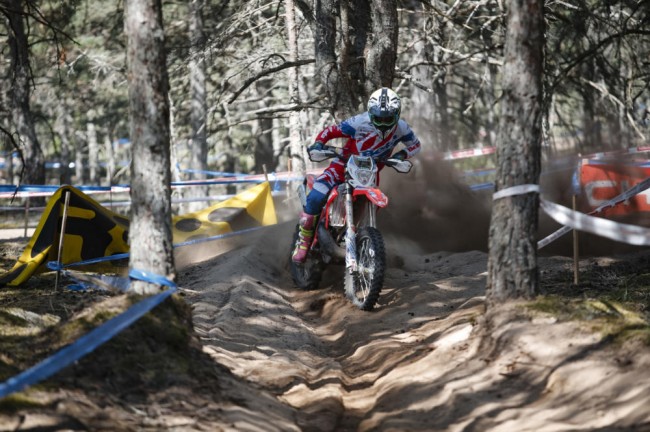 One week on from the dry and demanding GP of Estonia, the 2021 Borilli FIM EnduroGP World Championship returns to action this evening as the AIRMOUSSE GP of Sweden gets underway in Skövde. Breaking away from the series’ familiar Friday-to-Sunday event schedule, the fourth round of the 2021 championship will start today, Thursday, with the AKRAPOVIC Super Test. Followed by two full days of racing, the event will conclude on Saturday afternoon when competitors will have completed the series’ two-event northern Europe tour. Set to enjoy yet more fine weather, the AIRMOUSSE GP of Sweden also marks the start of the second half of the 2021 Borilli FIM EnduroGP World Championship.

Welcoming the Enduro Woman class competitors back to the championship, as well as a number of ‘home’ wild card riders to the Borilli FIM EnduroGP series, the AIRMOUSSE GP of Sweden looks set to be hot, dry and demanding. And with a quarry based ACERBIS Cross Test, a CHAMPION Enduro Test that features both woodland and grass tracks, and a NERVE by JUST1 Extreme Test that features some unusual obstacles, the event has plenty to challenge all competitors.

One rider looking to deliver the goods at the AIRMOUSSE GP of Sweden is Spain’s Josep Garcia (KTM). Winner in the EnduroGP class on both days at the GP of Estonia, Josep not only showed that he could remove the mistakes that had hampered him at the opening rounds of the series, but he also rose to the occasion, took the fight to EnduroGP championship leader Brad Freeman (Beta), and earned two class wins. If the pint-sized Spaniard can do the same in Sweden and claim another double EnduroGP class win, he’ll make further, important inroads into Freeman’s class lead.

But one thing’s guaranteed in Skövde – Brad Freeman (Beta) will not want to finish off the top step of the podium! Determined to revert to his winning ways and extend his EnduroGP series lead before the championship’s summer break, Freeman will undoubtedly be gunning for glory with his all-out attacking style. The Garcia vs Freeman battle is certainly one to watch!

What many are waiting to see is if any other rider can get themselves in on the EnduroGP class action and prevent a repeat of the two-rider Garcia/Freeman battle that stole the show in Estonia. Will Ruprecht (TM), Steve Holcombe (Beta), Andrea Verona (GASGAS), and Davide Guarneri (Fantic), are all poised ready to give their all and challenge for a podium result.

Improving with every passing round of the 2021 Borilli FIM EnduroGP World Championship, Andrea Verona (GASGAS) could well have been comfortably on his way to defending his Enduro1 title, were it not for countryman David Guarneri (Fantic) and his impressive rides so far in the series. With Verona improving with each day of competition, the Italian has been shadowed every step of the way by Guarneri as he continues to deliver results few at the start of the series were expecting him to deliver.

With little to separate the two riders, and with mistakes more so than out-and-out speed often the deciding factor in who finishes in what position, in Sweden the fight for the all-important 20-point maximum daily point score will most definitely be on between Verona and Guarneri.

With the two Italians comfortably ahead in the E1 championship standings, three riders will all be looking to the AIRMOUSSE GP of Sweden as the event at which they claim a podium result – Samuele Bernardini (Honda), Antoine Megain (Sherco), and Davide Soreca (Husqvarna). With little to separate the three riders in the class standings, all are well-aware of just how important the Swedish event is.

Four questions regarding the Enduro2 class front runners will be answered over the next three days. Can Wil Ruprecht (TM) remain at the top of the class standings? Will Josep Garcia (KTM) repeat the winning form he delivered in Estonia? Can Steve Holcombe (Beta) put injury behind him and show why he is the defending class champion. Finally, having got a taste of podium success in Estonia, will Hamish MacDonald again finish top three in E2?

In the Enduro3 class there is little that can stop Brad Freeman (Beta) from winning. Topping the class podium on each and every day of the series prior to the AIRMOUSSE GP of Sweden, Freeman is all but assured another 40-point haul, which will further extend his so far perfect season.

Behind the Brit Spain’s Jaume Betriu (KTM) sits next in line, ready to pounce should Freeman make any mistake. Followed by the McCanney brothers Danny (Sherco) and Jamie (Husqvarna), each of the three riders will be gunning for the podium and hoping to get as close as possible to Freeman.

Returning to the series for the first time since the GP of Portugal, the Enduro Women class will inject more close fought competition into the championship as the three-rider battle at the top of the class is set to rage on. With just one-point separating Mireia Badia (GASGAS), Laia Sanz (GASGAS), and Jane Daniels (Fantic), and just one round of the series left to run for the women after the AIRMOUSSE GP of Sweden, all three know just how important the middle championship event will be.

In the Enduro Junior class Matteo Pavoni (TM) rolls into Skövde with his confidence high and growing increasingly used to winning. Despite not having everything his own way in 2021 – the Italian has twice been beaten by his TM team-mate Lorenzo Macoritto – Pavoni’s speed and consistency sees him hold a slender but important 12-point championship lead. Comfortably ahead of their closest rivals, little looks set to stop the Italian duo again battling for top honours.

Last but by no means least, Albin Norrbin (Fantic) looks set to put a smile on the Swedish fans’ faces as the Enduro Youth championship leader brings some impressively strong form into his home GP. Winning the last three days of the series, and dominating his class in Estonia, Norrbin will be going all-out in his attempt to stand on top of the podium in Skövde, surrounded by Swedish supporters.