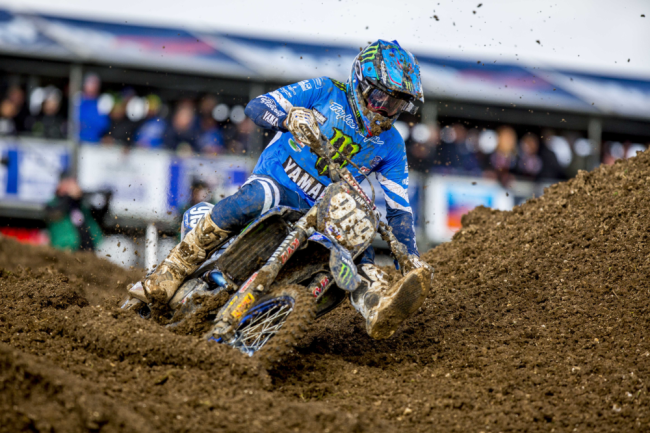 MXGP still has to solidify for 2020 but the doubts over the length and breadth of the stalled FIM World Championship has not given cause for concern for the latest round of racers reaching the end of their time in the MX2 class.

For 2021 two factory riders – Rockstar Energy Husqvarna’s Thomas Kjer Olsen and Monster Energy Yamaha’s Ben Watson – will both need to move into the premier category after hitting the 23-year age ceiling. Rather than worry and harbour disappointment at the stunted end to their stint in MX2 (and with no signs of an extension or year’s reprieve from the ruling by promoters Infront Motor Racing and the FIM) both Olsen and Watson are firmly looking ahead.

“Honestly, I have been thinking it and I’ve had a lot of fun on the 250 but I’ve also been on the bike a long time. I feel I am more than ready for MXGP,” Olsen says.

“I want to move up to the 450, even if they turn around and say the guys who have aged out can have another year,” states Watson “although nobody – the teams or riders – know what is really going on at the moment. I’m looking forward to MXGP and my main focus is just to find a good bike.”

Both 23-year old riders are MX2 ‘protagonists’. Former EMX250 European Champion Olsen has finished in the top three of the standings for all three of his Grand Prix seasons and would be considered the top ‘draft pick’ of the division. Watson has lost two campaigns due to injury but has been a regular presence in the top five of Grands Prix and grasped his first podium trophy in 2018. Both are also over 6ft and viewed as ‘tall’ for the category compared to diminutive rivals like Red Bull KTM’s Tom Vialle, the current championship leader after just two rounds.

“I’ve been on the 250 since I was fifteen because I was already pretty big then, so I’m really looking forward to the 450 now,” says Olsen, arguably the favourite for the 2020 MX2 crown and now fully recovered from a pre-season wrist fracture that dented his competitiveness at the opening two races. “I want the best out of 2020 and I’m dedicated to that, but I want to try a new class and new stuff in my career.”

2020 will be asterisked as the ‘Corona Championship’ but aside from the shortened schedule the aftermath of the interrupted season is likely to run into 2021. Normally Olsen and Watson should be high on many factories and teams ‘shopping lists’ and for squads looking towards the next young talent to trouble the MXGP elite. That scenario – and their respective futures – is now unclear.

“I don’t think teams are rushing to sign people or they do not have much insight on how it will be for 2021,” confides Watson. “If people sign now then it’s based purely on past potential and not on recent or developing form: we had two races this year, one was cut short on Saturday because of the rain and the other was a very heavy race. Nobody has a clear view. I think things could be signed really late for 2021.”

“If we go onto a 450 without much support then we’ll just have to prove ourselves and earn the ride,” he adds. “It is a difficult one but I want to go up to the 450 and I’m sure riders like Thomas will as well.”

“I still believe that we’ll get some races this year, we’ll still have a [MX2] championship,” stresses Olsen. “Of course, there is the chance that we don’t…but things are already changing and there is talk of races happening again in Belgium.”
While both are contentedly resigned to the biological clock that is forcing a new direction in their careers, there is little escaping the fact that factory-backed opportunities could be sparse. A natural step for Olsen would be the Rockstar Energy IceOne Husqvarna team, but Antti Pyrhonen’s outfit are already focussed on ‘talent development’ with both Pauls Jonass and Arminas Jasikonis, both just 23 in 2020, on the books. Watson’s options at Yamaha could be limited if the three-man factory crew of Jeremy Seewer, Gautier Paulin and Arnaud Tonus slims to a duet for ’21. The general MXGP platform tightens further if well-supported satellite teams are forced to evaluate the depth of their investment for 2021. Despite their goals for MXGP action it does mean further disorientation if the rules are briefly changed (and Infront Motor Racing have demonstrated their flexibility with Grands Prix by applying a one-day format to the eventual 2020 events).

“It is hard for us being 23 and not being out on track to prove ourselves to earn that deal for 2021,” illustrates Watson. “If I had the chance to stay down in MX2 then it depends on the level of support; for example, If I could stay where I am right now for another year on the 250 then I’d snatch it up. But if the right opportunity came up for a nice MXGP ride – and I could still stay down – then the 450 would be my first choice.”