2019 MXGP of Turkey Presented in Afyon 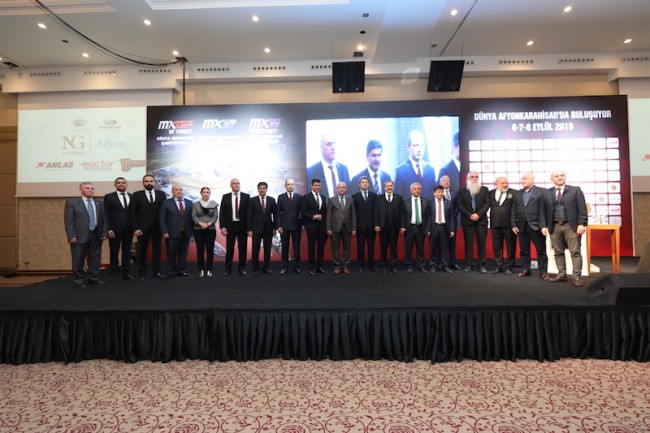 As the 2019 season has kicked off last week the organizers of the MXGP of Turkey in Afyonkarahisar have presented the return of the event for 2019 to both Turkish and International media today at the NG Hotel in Afyon.

Taking the stage in Afyon was Turkish Motorcycling Federation President Bekir Yunus Ucar, Governor of Afyonkarahisar Mustafa Tutulmaz, Mayor of Afyonkarahisar Burhanettin Coban and Youthstream’s Guido Giacinto Becchis all spoke on the upcoming event along with its inaugural success.

A video started off the presentation showcasing the 2018 edition and its success as the first MXGP of Turkey in years and the first ever visit to Afyon. 2019 will be the second year for the FIM Motocross World Championship in Afyon and after winning the 2018 MXGP Award for Best Infrastructure in its first attempt another top-class event is expected at the venue this season.

The presentation also included the successful growth of MXGP in general over the past year with the return of the MXGP Turkey being an important milestone and symbol of the world-wide championship.

With the national and international media briefed on round 17 of the 19 this season the MXGP of Turkey is now counting down the days to the first gates dropping on September 7th and 8th.

For more information about the 2019 MXGP of Turkey in Afyon click HERE https://www.mxgp.com/tracks/afyon