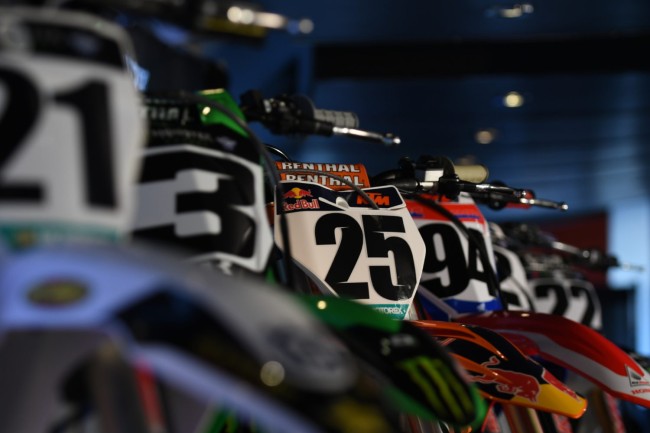 Jonathan McCready: With no defending champion for 2018 the 450 class will see a new champ in 2018 but is is going to be?! Eli Tomac was the fastest in 2017 winning nine races but a couple of mistakes cost him the title, however Marvin Musquin has the off- season momentum so who really is the favourite?

For me Tomac probably just edges it and with the point system suiting him I think he might just edge the supercross title over Musquin as well. Marvin can have the odd night when the whoops aren’t to his liking and that might prevent him from winning the title, but Marvin has a serious shot at it this year if his confidence remains high.

Tomac is the pre-season favourite in many people’s eyes. Pic: Doug Turney/ Gatedrop

Then there is Ken Roczen, the can’t miss kid almost lost his career last season with his horrific crash last season at a time when it looked like he was the man to beat for the title. One year one, while the talent is still there, there are  question marks about the endurance in his arm and can it withstand another big crash? I think Roczen might win some races, but to win the title in straight after the injury might be a bit much to ask, but with Ken’s natural talent and his extreme self-confidence nothing is impossible!

The wildcards could be Jason Anderson and Cole Seely, who are both waiting I think wings. They can wins races but can they get the extra edge to win challenge for the title?

Cooper Webb is a guy I think has the stuff to get amongst the elite guys, a title might be too far away considering he hasn’t won a 450 main yet but with the new 2018 Yamaha and needing to show his ability in his second year in the class, I expect Webb to be up there with Seely and Anderson, knocking on the door for wins.

In the 250 classes, with both champs staying in the division there should be some great racing in both coasts. I am going for Adam Cianciarulo to finally get that supercross title in his bag in the West and Zach Osborne to defend his Easy coast championship.

Andy McKinstry: The season gets underway this weekend and it’s shaping up for another great season. So, who’s going to do the business this year in Supercross? Honestly, I am feeling that Marvin Musquin can do it this year and give KTM another SX title.

Eli Tomac is obviously one of the hot favourites and he will win plenty of the races, perhaps more than Musquin but can he be as consistent as the French man? It remains to be seen. I can see Musquin being on the podium more often than not which could see him winning the title.

The German makes his comeback to racing this weekend! After a nasty injury it’s great that Ken Roczen will be back this weekend. I think he’s capable of some race win’s but to win the title will be tough, nothing is impossible though! I just hope he manages to stay injury free for the entire season, another injury is the last thing he needs.

Then there’s Cooper Webb, I am expecting much more from him this year. Webb didn’t have the best rookie year but with a year behind him and on the 2018 Yamaha he should be battling for plenty of top fives.

The two guys that can’t be underestimated are Cole Seely and Jason Anderson. When they get a good start and bring their A game they can win main’s, they just need to find the consistency which sometime lets them down.

In the 250’s, after losing the title on the last corner last year, I am tipping Joey Savatgy to win the east coast with Zach Osborne winning the west coast once again.