11 Years in the Making: Motocross of Nations Returns to Matterley Basin 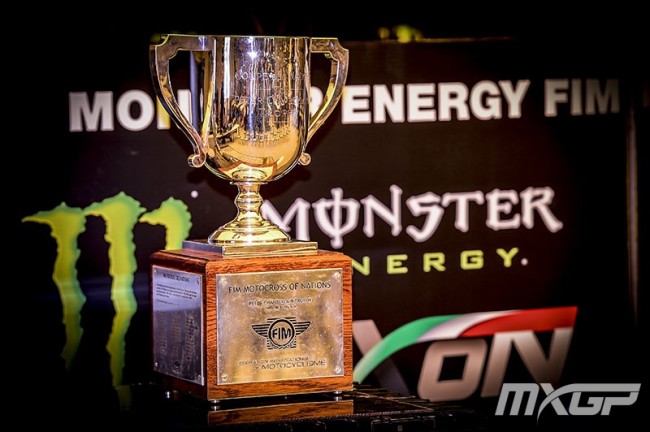 MATTERLEY BASIN (Great Britain), 27 September 2017 – The biggest event of 2017, the Monster Energy FIM Motocross of Nations presented by FIAT Professional, is upon us at the amazing and historic Matterley Basin circuit in the UK. The 71st running of the event will bring 39 nations together from countries as far as Brazil and exotic as Thailand or Iran.

On the topic of atmosphere and supreme racing, last year’s Monster Energy FIM Motocross of Nations presented by FIAT Professional in Maggiora, Italy, is not one to forget. Scores of fans filled the hillsides and cheered for their countrymen in the patriotic battle. Last year it was team France who edged out the competition by 1 point but with a swarm of new competitors this year may see a new holder of the Chamberlain trophy.

Multi-time and defending champions Team France again posses a strong team led by Rockstar Energy Husqvarna Factory Racing’s Gautier Paulin. The experienced French rider comes off a strong season in the MXGP World Championship where he won the MXGP of Europe in Valkenswaard and took third overall in the championship standings.

Joining Paulin is Monster Energy Yamaha Factory MXGP’s Romain Febvre and Rockstar Energy Husqvarna Factory Racing’s Christophe Charlier. Febvre struggled in the early part of the 2017 season but has finished strong reaching the podium in two of the last four rounds while Charlier fills in for the injured Dylan Ferrandis and Benoit Paturel.

Runner-up in 2016 was team The Netherlands as they lost out by a single point. The 2017 team will again pose as a strong threat to the win with Red Bull KTM Factory Racing’s Jeffrey Herlings and Glenn Coldenhoff plus MX2 HSF Motorsports rider Brian Bogers.

Herlings has been the man to beat in the MXGP championship during the second half of the season scoring 6 overall victories in 2017. Herlings finished second in the MXGP championship in his rookie year and will take his much improved 450cc experience into the UK. Glenn Coldenhoff and Brian Bogers are not to be counted out either as both have shown the speed required to fight at the top of the standings throughout their 2017 campaign.

Team USA is always in everybody’s bets when speaking of a potential winner. The last time the Motocross of Nations was celebrated in Matterley Basin in 2006 the Americans won in impressive fashion. This year team USA will be composed by HRC’s Cole Seely along with Rockstar Energy Husqvarna Factory Racing’s Zach Osborne and Thomas Covington.

Osborne is a prior MX2 World Championship racer and will look to use his experience racing abroad to help him this weekend. Thomas Covington may be an American by blood but he has been riding, racing and training for years in Europe and comes off of several strong results in 2017 including various race wins and two overall victories as recent as Villars sous Ecot.

The home country, Team Great Britain, will indeed have the crowd behind them. The team is made up by Monster Energy DRT Kawasaki’s Tommy Searle plus Rockstar Energy Husqvarna Factory Racing’s Max Anstie and Dean Wilson. Anstie has momentum on his side as he was on the podium 3 times in his 2017 rookie MXGP campaign and 2 of them came at the last 2 rounds.

Dean Ferris leads Team Australia and pairs up with Kirk Gibbs and Team Suzuki World MX2’s Hunter Lawerence. Lawerence comes of his career first race win and pole position at the MXGP of Pays de Montbéliard only a couple of weeks ago.

Team Switzerland will be a force to reckon with as well with Wilvo Yamaha MXGP’s Arnaud Tonus, Team Suzuki World MXGP’s Jeremy Seewer, and Honda Redmoto Assomotor’s Valentin Guillod. Tonus while returning from injury has an MXGP race win to his name in 2017 and Seewer steps up to the 450cc after finishing second in the 2017 MX2 World Championship.