Young Irish rider to end the season racing in the Netherlands 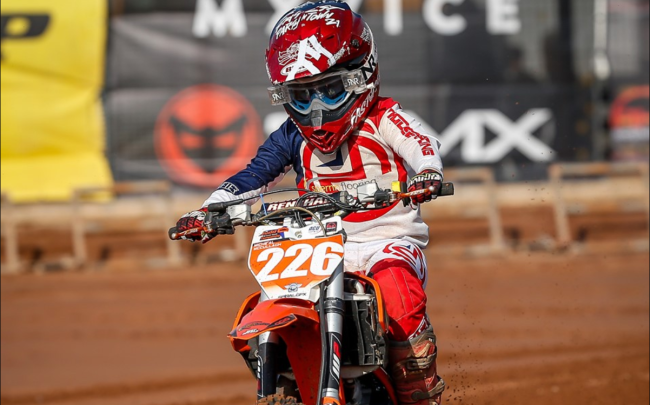 While the Motocross season in Ireland is coming to an end, young Irish rider, Micheàl McCullagh will be heading to the Netherlands to end his season.

The 65cc rider will contest the final four rounds of the 65cc ONK Dutch Championships which take place the end of this month and beginning of October. McCullagh contested a round of the series earlier in the year and wanted the opportunity to do more so will spend more time in the Netherlands later this month.

“We’re doing the last 4 rounds because everything is basically finished at home and it’s important to finish the year of with a high. We contested a round at Eersel in May earlier this year, it was a shock to the system but I dealt with it good and with finishes inside the top 20. It’s just the depth of the fields are so strong the whole way down to 40th position”, McCullagh stated.

The tracks are clearly much different in the Netherlands compared to Ireland with plenty of deep sand.

“The tracks and their attitude to motocross is on a different level, even the practice tracks. For instance we were at Grevenbroich in Germany training and was out all day with Paul Jonass on the same track, everybody respects everyone, we could learn a lot of them”.

When it comes to expectations, McCullagh just wants to learn as much as possible riding with some of the best young motocross talents in the world.

“We have no expectations, just to give 100% at all times and to learn, I really love the deep sand which means I’m a stronger sand rider than hard pack”.

In terms for the future, McCullagh has big plans for 2020 and will even have a go at qualifying for the EMX65 if it’s possible to get an entry. The EMX65 final takes place at the Loket circuit in Czech Republic and it’d be great to see a young Irish rider contest.

“Next year we’re planning on contesting the BYN and whatever of the ONK that doesn’t clash with the BYN as it’s 16 rounds in the Netherlands. We’re also going to enter the EMX65 championship if we can get entered. We’re doing a lot of work with Graeme Irwin and have a 5 year plan in place and if we feel the need to move when he’s 13/14 then yes we will definitely move. I truly believe to be the best you must ride with the best day in day out”, McCullagh stated.

Graeme Irwin who’s was racing the MXGP World Championship just last year before a wrist injury meant he had to retire from the sport, has high praise for McCullagh.

“It’s a great pleasure getting to to work with Micheàl, he is a talented kid, hard worker and always giving 100%. Already this season we’ve seen his results improve every week and the kid excels in the rougher conditions. This is only the very start of a long road that lays ahead and a fight to get to the top and become a professional/Champion. There is great support behind him with both his mother and father and they will give him everything he needs to get to the top”, Irwin commented.