Why American MXoN excuses need to stop – they don’t even race Europe! 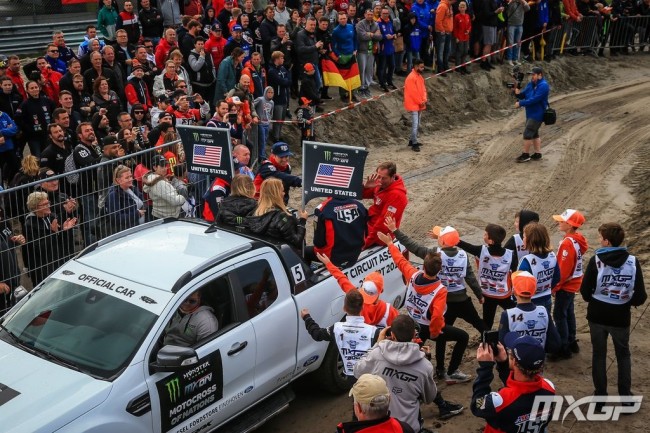 It’s getting embarrassing now. The latest complaint from America is the weather is too bad at the MXoN and the race should be held in a country in Southern Europe so it’s dry and will help USA win. They also want Youthstream to help pay their way to even show up and also have the race closer to the end of their series to help them win.

That’s how low the excuses are going after USA didn’t win at Assen. It isn’t the riders making the excuses of course, if everyone in the US industry was more respectful like Jason Anderson and Zach Osborne, the motocross world would be a better place.

The undeniable truth is the USA already have a huge advantage at the MXoN thanks to the size of their country compared to other countries and the amount of good riders they can choose from. But they love to make it America v the Europeans and every time they win they write the narrative that the USA beat “the Europeans,” and then make a ridiculous leap to surmising that AMA racing and American riders are superior to the “Euros” and the world championship. That’s why winning the MXoN is so important to them, they (falsely) see it at as proving their superiority over the “euros.”

Of course it’s all nonsense, but unfortunately that narrative has been unchallenged for years. When you look into that claim, you realise it is a bit of a red herring as the best European riders are not in the same team while the USA’s are! That gives the America v Europe narrative an immediate lopsided perspective. Individually, European riders have always been competitive (check the individual results down the years) with the Americans but as they are usually from different countries at the MXoN allowing America’s always strong team to usually win the MXoN overall, until recently.

Here is a recent press release about the AMA motocross series and how they market it, “The most talented collection of riders on the planet will battle it out over the course of 24 motos across the 450 Class and 250 Class, pushing both their physical and mental limits in the most grueling conditions found in any motorsports championship. Their quest to capture the most coveted titles in motocross.”

The world championship is the pinnacle and truest test for outdoor motocross, every rider makes it their priority, and you have to adapt to different countries and tracks. There is no rival, we all know how good the US series is of course, it’s fantastic racing with superb riders competing, but ultimately it’s different, it’s still a national championship that favours riders of that country, and most riders priority is supercross not motocross in the US.

If you want to be the best motocross rider in the world you prove it by winning the world championship to show your versatility across countries, tracks and continents, winning an AMA National motocross championship or the MXoN as a team, doesn’t prove that. MXGP is the ultimate measuring stick for your motocross ability.

America need to report that and accept that winning the MXoN doesn’t prove US riders are superior to the Europeans or that the AMA motocross series is superior to the World Championship. That would immediately remove the need to use embarrassing excuses.

Take for example the fact they want Youthstream to give them financial help, were they saying that last year when Slovenia, that included world champ Tim Gajser, couldn’t afford to get to Red Bud? We didn’t here a single complaint about one of the biggest stars of the sport not being able to attend! One year later and the richest motocross nation in the world complains about cost.

While the US did have a lot of bad luck at Assen, so did many other teams. Team GB lost two riders shortly before the event and brought in an Enduro rider who then suffered a DNF in the first moto and partially dislocated his shoulder in a crash. France had two DNFs, Belgium lost one of their best results to a DNF too, but those issues that offer a better overall perspective of the day, seem to get forgotten when you read the US breakdown of the event, it’s always very US centric.

America will win the MXoN again, they are too strong of a nation with too many brilliant elite level riders for their losing streak to continue, and when they win again they will deserve the victory. But what needs to be told in America is the truth, not more excuses when you already have such an advantage at the event.

America need to stop trying to use the MXoN to prove superiority to the world championship. Just enjoy the race for the international celebration of motocross that it is. Maybe then you can enjoy watching and respect MXGP as well as AMA Supercross and motocross during the season.

They aren’t rivals or mutually exclusive, it’s not unpatriotic for American fans or media to follow the world championship of motocross and AMA racing, many motocross fans around the globe do just that because of the different qualities both have to offer.

America is still part of the world even if, observing from the outside, it unfortunately sometime feels that they want to live in their own motocross world.