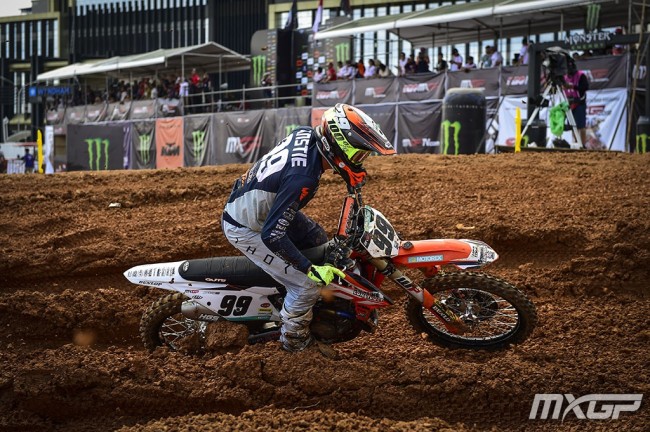 Max Anstie: The Brit looked back to his best in Indonesia. The jumpy, technical circuit suited Anstie’s style and he rode past Seewer and teammate Coldenhoff in race one to take a fine second place.

In race two Anstie got a good start but perhaps got a bit too excited as he tried to take an inside line on leader Gajser on lap one and washed the front wheel. But Anstie showed he could come from behind and rode back to sixth place and fought overall, just missing the podium by a point. While his mistake could have been avoided, it showed just how confident Max felt out there that he felt strong enough to go for a pass on Gajser that early. He was feeling good all weekend and it showed.

Anstie said on a good performance: “Pleased with today, except for that crash in moto two! Good battling up front and already looking forward Ron Semarang.”

Tim Gajser: The championship leader looked so relaxed in the first moto he appeared to have barely broken a sweat when he took his helmet off!

He did make a small mistake that cost him the race win in moto two but Gajser is still going for the wins despite a big championship learn and has now won six Grand Prix events in a row and won 10 of the 12 motos! Gajser is maybe in the most dominant form of his career and with more hard pack in the next two rounds things might not change until Herlings comes back!

“All day I really enjoyed riding the tracks” said Gajser. “In the first moto I grabbed the holeshot and made a little gap and controlled the race. I had a lot of fun out there and managed to win the first moto. In the second race I didn’t have the best jump out of the gate so I got closed off on the straight, but as they ran wide, I was able to cut inside and take another holeshot. On the fourth lap and went off the track, and my rear tyre spun on the dusty ground and I had a little crash. I re-joined the race in third place, but managed to pass Jeremy immediately. I saw that Romain was riding a really good pace out front so I decided to settle for second place and to win another overall. Obviously I’m still happy with how the day went and my standing in the championship.”

Romain Febvre: The Frenchman has shown some good speed since his comeback but finally a good start and the chance to go with Gajser helped create the circumstances for Febvre to get a deserved win. If anyone can beat Gajser on these tracks it is Febvre, he isn’t intimidated and has great hard pack skills and the confidence to win, but his starts and little mistakes meant he hadn’t quite achieved that win he wanted until Sunday.

Now that he has a moto win, will that boost mean more are just around the corner?

Febvre said: “It’s been too long since I last won a race. It’s been hard and I have wondered what I am doing, but finally it’s in and I have done it, but still I am second overall, and I would like to win the Grand Prix. It’s always nice to win races, but I want to stand on the top step of the podium. It feels like it has been so close this season, but I miss it by just a little bit. I hope that it is coming, and I look forward to going to Semarang next weekend because I like the track there, it is fast and nice to ride, so I hope for good weather, good starts and then it will be good.”