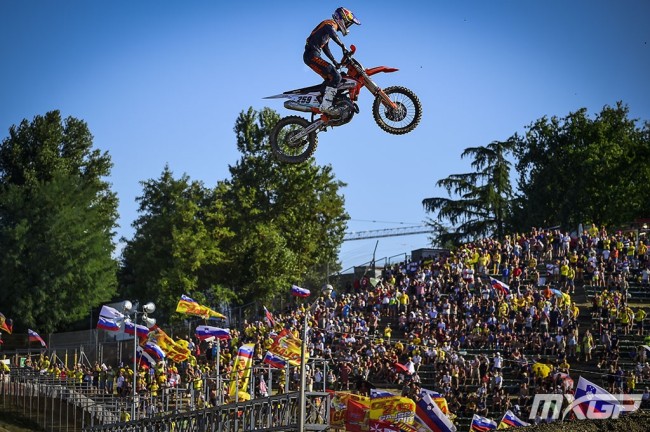 Glenn Coldenhoff: what a ride by the Dutchman! After a tough season, albeit one that has been gaining momentum I the last few weeks Coldenhoff really showed what he could do at Imola.

Dominating both motos, this was probably even more impressive than his Red Bud MXoN performance This time he beat a tough field of 450 MXGP riders twice and did it on a hard pack, tricky track, not conditions known to be a Dutch playground!

But Coldenhoff showed his versatility and that when he is on form and feeling good, he has world class speed.

With Assen just around the corner the pressure will be on the Dutch but the win will be a huge boost of confidence for Coldenhoff going into what will probably be the biggest race of his life with the once in a lifetime chance of winning the Nations at home.

“Today is comparable to Red Bud for me, where I also won both heats. These are the kind of days where everything goes right, and it feels great,” he said.

Tommy Searle: There are rumours Tommy Searle might be racing the British championships only next year, ending his Grand Prix career. But after a sixth overall on the factory Kawasaki, despite recent injuries, it would be a shame for Searle to be gone from the elite level when he is still capable of these performances.

It’s been a long time since Searle saw the pace at the front of the pack, but after losing a few spots in the intense first couple of laps, Searle regrouped well and hung on to the pace of the podium contenders in both motos for his best GP of the year. With Max Anstie now a doubt for Assen, Searle may get an extra race aboard the factory machine to impress any remaining GP teams who could do a lot worse than having Searle on their team when he still has the speed and talent to run with the best.

Alex Lupino: After breaking his neck just a few short weeks ago, Alex Lupino was amazingly impressive at his home GP at Imola and took eighth overall. It’s a great sign of his mental strength and will to perform for his countrymen that he was able to get back up to speed and battle with the factory riders so soon after such a scary and painful injury.

With Monticelli getting knocked out, Lupino was the last big hope for the Italian fans in the premier class and he delivered, and it looks like he will be the team leader for Italy in Assen as well.