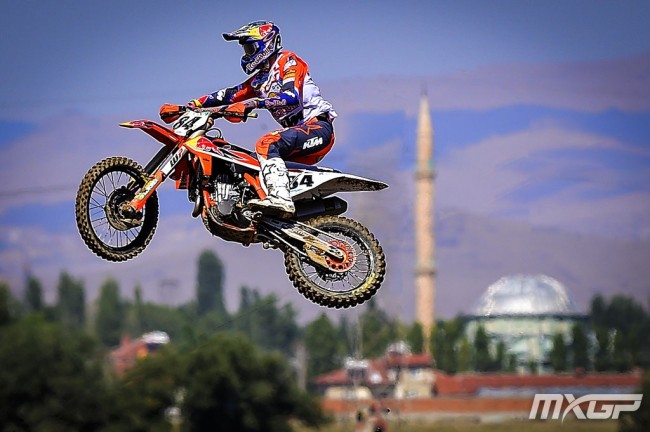 Jeffrey Herlings: The most impressive thing about Jeffrey Herlings winning wasn’t the fact he won the GP but the fact that, despite being in position to win the overall with 1-2, he wanted to do it by going 1-1! The 2018 world champ made a superb pass on the last lap to make it happen on his Dutch MXoN teammate Glenn Coldenhoff.

As we saw when he won with a broken ankle in Latvia, Herlings biggest strength aside from his talent is his will to win, it is huge. It might have even cost him a couple of world titles along the way, but when you see a comeback like he has made this season not once but twice, sometimes you have to sit back and applaud someone who still continues to want to win more than anyone else on the track despite all the money and title he already has. James Stewart once said, you ride from the heart, and Jeffrey Herlings certainly does that.

Ivo Monticelli: What a ride from the Italian! Ever since Christophe Pourcel worked with him a year ago, something has clicked with Monticelli and he has taken his riding to another level. In Turkey he maybe had the best ride of his career coming from last to eighth in race one and then running third for the majority of race two, behind Herlings and Coldenhoff, until Gajser finally got him at the end.

To make his ride even more impressive was the fact he was only back after a concussion having been knocked out at Imola had forced him out of the Swedish GP, but after some rest, Ivo has come back as strong as ever to put in a great ride and remind us that the Italian team could still be pretty strong despite Cairoli’s absence at Assen. It is also proving fantastic end to the season for the Standing Construct team with Coldenhoff almost winning race two and on the podium again.

Brian Bogers: 13th overall doesn’t tell the story of how well Brian Bogers rode in Turkey. The HRC Honda man, after a tough season, was up in the top five for the first 20 minutes of both motos and showed that he has the talent to be competitive in the most competitive motorcycle series in the world. Bogers won’t be back at HRC Honda next season but it was a nice reminder to other teams that he could be a good signing if he can find that speed consistently. It is after all, essentially his rookie season on the 450 after injury wrecked his 2018 season.

Bogers commented: There were both positives and negatives from today’s racing. I’m quite happy with my speed and I got two good starts which allowed me to race for 15-20 minutes with the top five guys. That is definitely something I’m happy with and it felt good when I was out there. Unfortunately the negative thing is the conditioning because it is still not on the level that it needs to be on and I wasn’t able to stay in the top five. I think when it gets like this, I am still feeling the effects of missing the whole 2018 campaign because to lose all that time off the bike in my rookie 450 season is quite a big loss. I now that is something I can work on though and I do think it is improving all the time so that is something I will continue to work on. However I will definitely take the positive things into China and hope to get two more good starts because that really was a good feeling.