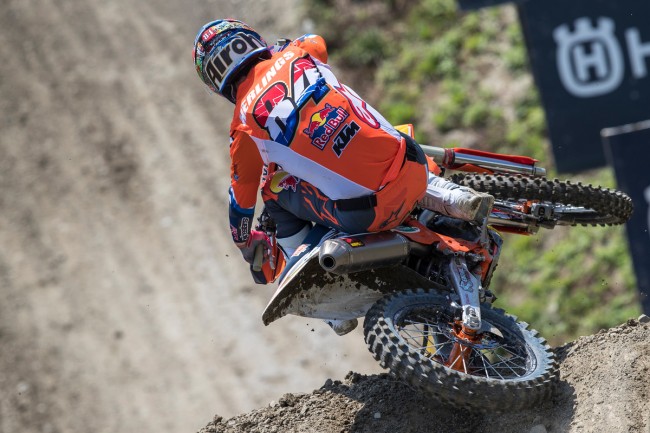 Tim Gajser: With Tony Cairoli leaving the door open again for Tim Gajser the pressure was on the factory Honda rider to deliver when the opportunity presented itself – and he did just that!

Gajser won both motos and barely made a mistake all day despite Arnaud Tonus putting the pressure on both times out. It gives Gajser a win streak of six motos in a row, a spectacular rebound since his Mantova disaster. Gajser has showed brilliant mental strength and determination and showed that hard pack riding is just as much a technical skill as the sand, and the Slovenian is proving to be the man to beat when it’s all about throttle control and precision right now.

Gajser, amazingly still jut 22, might just be in the best form of his career and now leads the championship by 13 points and is doing it against one of the best riders of the all time. Latvia will now be fascinating, Cairoli has to hit back on his preferred terrain but if Gajser can beat Cairoli there it really will be a big statement in the season!

Arnaud Tonus: The Swiss rider is a joy to watch on a motocross bike. Born to ride a 450 on hard pack, Tonus looks like he’s not even trying as he appears to float around the circuit in complete control, putting the bike exactly where he wants it with supreme technical skills and superb throttle control and flow that is perfect for slick tracks.

The only mistake he made probably cost him the win when he clipped the hay bale going for an inside line on Gajser for the lead and what would have been the GP victory, but Tonus is really showing his true potential right now.

To miss a full season then come back and take three podiums in a row and come close to the GP win is so impressive, and once again shows the importance of having diversity in the GP tracks. Keeping hard pack tracks as hard pack so those riders with those particular skills can shine too is essential and not have every track sand or loamy ruts to suit the riders who struggle with throttle control. Gajser and Tonus gave the rest riding hard-pack lessons in Russia on Sunday!

“It was not easy to fight for the lead,” said Tonus. “I was happy I had some good starts so at the beginning I was already close to Tim [Gajser]. There were not too many opportunities to pass on this track, so I came close, and I went for it, but I ended up making a small mistake. I am happy I tried and was able to recover and still finish second. I am still super thankful to be up here on the podium three times in a row.”

Jeremy Seewer: Jeremy Seewer has been getting better and better this season and become a major challenger with enhanced raw speed over the 2018 season. Seewer mentioned how comfortable he feels in the factory Yamaha team and now he gets to enjoy his first podium in the premier class of the sport – and he earned it.

Seewer was up there in both motos going 5-3, making passes, showing aggression and throwing the big 450 around with ease when he wanted too over the big jumps. He appears to be believing he is one of the to guys now and along with getting his fitness back from an early season healthy issue is really showing what he can do. Again his technical style is showing on the hard pack but Seewer can also ride the sand and should be there or thereabouts all year.

“It’s amazing to make it onto the MXGP podium,” exclaimed delighted Seewer. “It feels like it is much harder to get here, much harder that even some of my MX2 wins. It is a lot of work to get here, there are a lot of fast guys and especially on a track like we had today where there are a lot of guys riding a similar speed. I feel like it takes time to move from the 250cc to the 450cc and to get comfortable on the bike, but in the past few weeks I have been feeling good. My crew on the Yamaha Factory team have done an amazing job, and I owe a big thanks to them for making it happen. It feels like we are moving in a really good direction.”

Jeffrey Herlings: Fourth overall isn’t normally something that impresses you with Jeffrey Herlings but after 6 months of dealing with a shattered foot and minimal time on a bike plus his worst surface, Herlings showed impressive heart in the heat to give it his all and be rewarded with fourth overall.

Herlings got a decent start in race one and stayed there all race long, not over extending himself but not giving in either, however his second moto eighth was possibly more impressive! Herlings didn’t get the best start and was racing his third moto in two days in 30 degree humidity and really had to fight for it!

Herlings had a group of four riders ready to pounce in race two but fought hard to keep them all behind him when he easily could have given in. The champ showed he has the heart to fight even when it isn’t for the win and he isn’t on top form or on his favourite track. The guy clearly just loves racing and puts his heart and soul into it regardless of what position he is in.

After the race Herlings admitted the struggles of dealing with the injury and the pain for the last six months and was pleasantly surprised at fourth overall in his first GP back: “I had a serious injury and it has been tough to get back here, mentally and physically, and with a lot of pain for a long time,” admitted the world champion. “I did not expect this result here today especially on this track. So to be close to the podium again feels pretty beautiful. I like the track in Latvia but I don’t have any firm expectations and I will not forget where I have come from to get to this point. Having said that we’ll always try to fight for a podium spot when we can!”