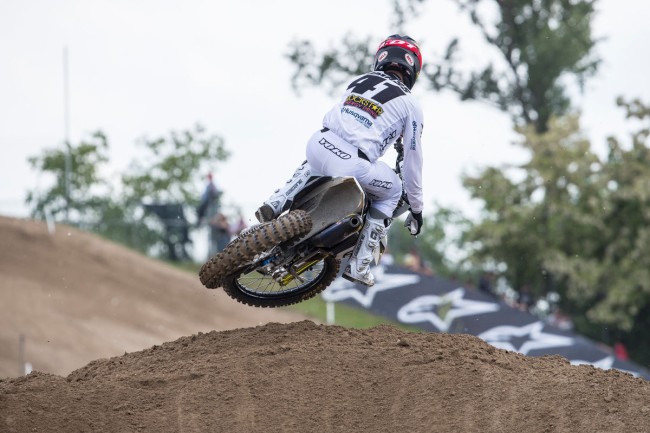 Antonio Cairoli: And that’s why he’s a nine time world champion! After being defeated by Tim Gajser five weeks ago, Cairoli came out firing, three holeshots and three wins on home soil as Gajser struggled to stay on.

Cairoli just puts the pressure on you by delivering week in and week out. His rivals know they can’t make a mistake and even when they win they know Cairoli will comeback stronger so somehow it’s you who has to deal with even more pressure at the next GP, not Cairoli!

Being good under pressure is part of being the best and that’s why Cairoli is one of the best ever and after an important 1-1, a happy Cairoli said: “It was very nice to be back in Italy and despite the weather there was a lot of people here today. The race itself went perfectly and we knew the start would be important, especially on a track that was so rutted – it was completely different to what it was yesterday. I’m really happy and thanks to all the team for their great work. It is very early to look at the standings so my focus is to stay in front as long as possible and try not to make a mistake. Hopefully we can be on the podium again next week in Portugal. It is important to be consistent and my goal this season is to always be in the top three. We’ll see how it goes.”

Pauls Jonass: The five week break has clearly done wonders for Pauls Jonass who came into the season underprepared and with limited bike time after his knee injury at the end of the 2018 season. But now we are seeing what he can do.

Jonass gated well both times out on Sunday and rode very strong in both motos with his improved bike fitness allowing him to maintain his speed for the duration of both motos. Jonass always seems to be a little bit underrated and goes under the the radar but the quiet former world champion has a lot of talent and, after just five GPs and a difficult winter, to make the podium in a very deep field underlines his riding talent and work ethic. Expect more success to come for the Latvian.

Jonass commented: “This weekend has been really great. I think the qualification race, even if I didn’t get the result I hoped for, was really important for me. Getting a good start and running close to the front really gave me a lot of confidence, which I took into today’s racing. Of course, the track was muddy, but I like the mud, so I felt good. I didn’t get perfect starts, but I managed to make some quick passes and avoid making any big mistakes. Getting the runner-up result in the first moto felt so, so good. The track was a little more one-lined in the second moto but again I felt good. I felt like I was a little quicker than Bogers but I got sideways a few times trying to pass him, so I decided not to take any more chances and just settle down. Getting a good overall result is much more important. To finish second overall, to get my first MXGP podium, to be stood on the box with Cairoli, it’s a very special moment for me. I feel like something has clicked in a positive way now with racing a 450. I’m not at 100% yet but I’m feeling a lot more confident and this result gives me a lot of motivation to keep working hard.”

Brian Bogers: It’s hard not to be pleased for Brian Bogers. A second place in race two saw the Dutchman get the best result of his career after more than a year of injury and comeback struggles. The HRC Honda rider fought hard to come back from a broken foot last season but the results haven’t really been there until yesterday.

Bogers finally showed what he is capable of and for his future career it is undoubtedly a huge moment. A lot of determination and mental fight went into this moment and Bogers deserves all the satisfaction and plaudits he gets for still believing and then delivering

Benoit Paturel: Injury, team issues and it seemed everything in between have all conspired against Benoit Paturel as he moved to the 450 class.

It had been thought the tough man of French motocross would excel on a 450 but that hasn’t been the case so far. So a top ten on very wet Mantova sand, not exactly his favourite conditions has to be a great step in the right direction, especially with a run of hard pack tracks coming up.