Who impressed: MXGP class in France 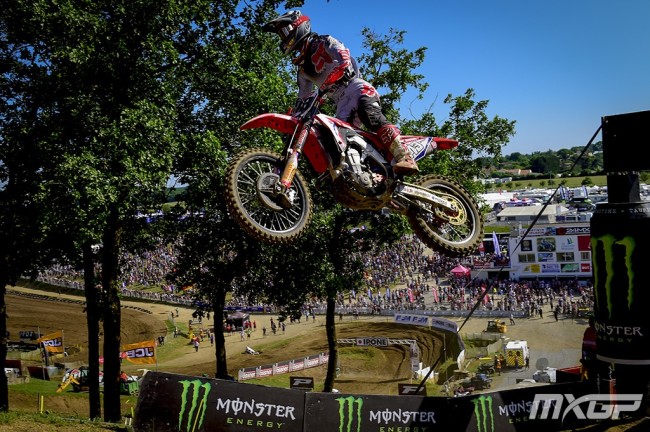 Tim Gajser: The Slovenian appears to be getting closer and closer to his full potiential. He came back strong from an average start to take fourth in race one then, as he did in GB last weekend, ran with Cairoli at the front for the first 15 minutes until the pace took it’s toll again. It looks like the speed is back but the race fitness at the intensity of the leaders isn’t all the way there, but he is getting closer! After a tough period of big crashes and injury Gajser is finally getting back to his old self and another podium will only help his confidence and motivation further.

Tim said: “I’m quite happy with third place and the podium finish. My riding was good and the speed was there, just in the first moto we had some issues at the start as I had a coming together with another rider and almost went down. We came from behind to finish fourth, which wasn’t a bad result all things considered. The second moto was much better: I had a great jump out of the gate and I was near the front early on. I rode at a good pace for twenty minutes, but Toni and Jeffrey were faster so I did my best to keep third place at the line. We’re quite happy, but we still need to improve a little bit in every area. The bike was really good though, so thanks to the team for their hard work!”

Jeffrey Herlings: Going 1-1 is pretty common now for Jeffrey Herlings in MXGP, in fact he has only lost two motos out of 18 and he came second in both of those! But in France his decision to start on the far outside and the expnsuing holeshot showed that Herlings isn’t just fast on track but sharp off it to come to such a radical decision. In race two he choose th same tactic but this time a Romain Febvre copied him and got the jump, Herlings still came round just inside the top ten after turn one and then once again made some passes on quite a difficult track to pass on before reeling Cairoli and passing him in yet another late race charge.

St Jean D’Angely was a track Herlings struggled at at the start of his career but he showed why he is the most complete rider in the world right now by chasing down the hard pack specialists, Gajser and Febvre, and then catch and pass Cairoli to underline his place as the fastest man on the planet.

Jeremy Seewer: On hard pack technical track, Jeremy Seewer shone brightly again. The Swiss rookie challenged in the top five for a long time in race eventually getting sixth and backed it up with an eighth place in race two. Seewer has hardly missed a beat all year and there are rumours linking him with the factory team next year such has been his performances in 2018. Seewer usually gets better every year too if MX2 is anything to go by and has proved to be a brilliant signing my Yamaha for 2018.

Valentin Guillod: A brilliant return to action for Valentin Guillod who scored a top ten in only his second race back. The Swiss has had some awful luck with injuries over the last 18 months and has only been back o; the bike for 4 weeks since breaking his leg at the start of the season. To get points each time out shows the talent Guillod still has and will no doubt give himself some much needed self belief after a tough period. In fact it was a good day for both Standing Construct riders with Kevin Strijbos, who has been riding with injuries all year,carding a 12th place in what is one of his best performances of the season.

Monticelli was on fire in France.

Ivo Monticelli: What a ride from Monticelli in race two! The JK Yamaha rider is working with Christophe Pourcel and the Frenchman appears to be working his magic as Monticelli was even catching Jeremy Seewer at one point in race two showing some superb speed in what has to be the best ride of his career. It’s always good to see a privateer team get some exposure at the JK Yamaha must be thrilled his Monticelli’s performance in France. Pourcel might be getting a few calls by other riders too if he can have that much affect on getting a rider to their full potential!