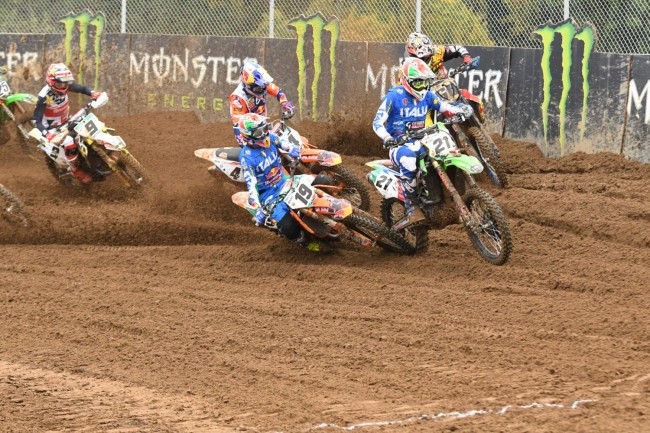 Jeffrey Herlings: A lot was expected of Jeffrey Herlings as he came to RedBud as MXGP World Champion and won 17 rounds of the series. The Dutch rider didn’t disappoint and lived up to the expectations. The regular GP fans won’t be surprised by anything Herlings does but it’s nice to see him do it in America’s home soil.

Herlings won the first moto by twenty-five seconds despite a first lap crash. However, he didn’t go 1-1 as Glenn Coldenhoff beat him in the last moto of the day but 1-2 was still enough for Herlings to win the MXGP overall at RedBud. Despite Vlaanderen not being able to race moto two, the Dutch still ended up on the box by finishing third overall – a great achievement. It’s been a long and challenging season for Herlings but he can finally take some time off before starting to think about 2019.

Gautier Paulin: A lot was made about the French federation and it’s fair to say Paulin didn’t have a great season. However, GP21 was clearly very motivated for the event. He raised his game for the Des Nations – an event he clearly loves.

Paulin went 2-3 in the moto’s and by passing Cairoli in the final moto, it give the French the overall victory. That’s the fifth consecutive time the French have won the event – despite not always sending their best team on paper they always find away to win. It was also Paulin’s last race with the Ice One Husqvarna as he heads to Wilvo Yamaha in 2019 for a new challenge. Looking ahead to 2019 he’ll be hoping for a better season than this year.

Antonio Cairoli: During the final round of the MXGP World Championship just last weekend, Cairoli took a crash and missed the main race day at Imola. For a while it was doubtful that he’d even ride at RedBud. However, Cairoli is a tough dude and with the way he’s been riding this year it’s easy to forget he’s 33 years old!

Carioli went down at the start of the first moto meaning he had to come through right from the back of the pack but he ended up sixth – a good recovery ride. In the second moto, he was looking good until he had to throw his goggles away, because of that he went back to fourth but had the goggles situation not have happened, Italy might have just won the event. Never the less, the Italian’s can be pumped with their second overall!

Cairoli going down at the start of moto one. Pic: Douglas Turney

Tanel Leok: They don’t call him the Estonian Express for nothing but Tanel Leok impressed at yet another Motocross Des Nations. Knowing Leok he’d have set his targets fairly high coming into the event and probably would have wanted to finish top ten in a moto.

He didn’t quite manage that but he went 12-19 in his moto’s to end up fifth overall in the MXGP class. Beating the likes of Clement Desalle and Ken Roczen he can be happy about his weekend!

Tommy Searle: You have to feel sorry for the Brit, it’s not been a great year for Searle but he’s another rider that just seems to love the Motocross Des Nations. In the first moto he was looking comfortable in fourth and even pulled away from Eli Tomac before his Kawasaki started to smoke. It was heartbreaking to see his bike expire just two laps from the end.

In the final moto, he got a reasonable start just outside the top ten and was battling with some big names throughout the moto. He ended up tenth and even caught Ken Roczen towards the end of the moto. Searle came home in tenth which was a very solid ride and the Brits who give him a hard time for getting picked should accept they were wrong. If it wasn’t for his bike stopping then he’d have easily been top five in the MXGP class. It’s good for Searle to end the season on a high and hopefully he’ll go into 2019 with plenty of confidence now.