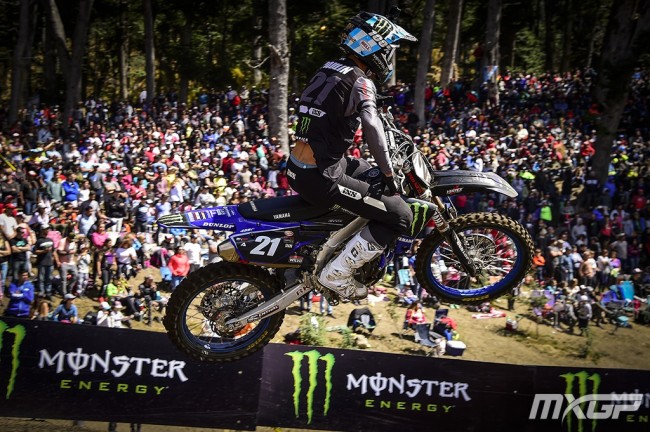 Gautier Paulin: The Frenchman rode a strong race one hanging onto the back of Clement Desalle as the big five broke away from the pack but it was moto two that Paulin really stood out. This was maybe Paulin’s nest ride since he was on Kawasaki! Fast and also aggressive with passes, Paulin looked great and clearly felt great as he never waited to make a move and was always on the front foot – something we haven’t seen in a few years.

The bigger size of the Yamaha seems to suit his taller frame just like the Kawasaki did and Paulin looked very at home on the machine for his first race of the GP season. It’s early days of course, but if Paulin can ride with the intensity he had in the final moto all year, he will be a major contender in 2019.

Jeremy Van Horebeek: What an incredible turnaround for Jeremy Van Horebeek! The Belgian somehow couldn’t get a ride despite still showing decent speed at times despite a difficult time in his final year with factory Yamaha, it looked like his MXGP careeer was over until SR Honda gave Van Horebeek a lifeline just a couple of weeks before the world championship began.

But no-one not even Van Horebeek expected a podium and he earned it! Good starts pro-active passes, this was the Van Horebeek of old, looking fast and comfortable, mixing it at the sharp end of the GP field. He looks much happier in the Honda and looks like he trusts the machine and perhapsm with no factory pressure and nothing to lose as a privateer, the atmosphere suits the Belgian to show what he can do without negative consequences of al poor results if he was a factory rider. It’s a almost a win/win situation and a podium is a superb reward for both the rider and the team whom stepped up to help him.

Tony Cairoli: What a rider this man is! Cairoli, forced to start from the outside gates after a rare DNF on Saturday qualifying, still made it happen on Sunday with some extra aggression around turn one and on the opening laps to get into the lead.

The Italian said he has worked on his intensity during the motos this winter and while he didn’t need to use that speed all moto in Argentina, he showed that when he needed the extra speed to make things happen, he had the speed in reserve to do it. His double pass of Gajser then Febvre in two corners plus a couple of quick laps to get a few second lead before controlling the pace again in race two, was textbook Cairoli and despite his age he seems to be getting even better, he seems to have every trick in his locker.

Tommy Searle: The Brit has had a tough few years staying healthy at the start of the last few season but in Argentina Searle gave an indication of what he could do on BOS Kawasaki with seventh overall. In race two he ran in the top five for a long time, just missing out on fifth when Paulin and Desalle got him in the final couple of laps, but Searle refused to give in to either of them and fought tooth and nail every inch of the moto.

Searle is always confident but it must have been nice to be able to start the year healthy and running up front with the leaders at MXGP for the first time in a long time and with the British GP next, Searle will be hoping to build on that form at his home round!

Pauls Jonass: It was all a bit unknown for Pauls Jonass after he made a late decision to race the opening round of the the MXGP series, his debut in the class, despite only a few weeks on the new bike and no pre-season races.

In free practice and timed qualifying Jonass immediately showed his potential with top tens, the qualifying race also started off well with Jonass well inside the top ten and battling for top five but the intensity of the MXGP class with no race time for nearly six months caught up on Jonass and he eventually went back to 18th.

But he learnt quickly, and by Sunday Jonass paced himself well for the two 30 minute motos to score 10th overall in his MXGP debut with very little pre-season preparation. It will only get better from here as the 2017 MX2 world champ gets back his race fitness and more comfortable on the bike.

“Considering the limited time I had on the bike during the off-season, I am really happy with my results here in Argentina,” said Jonass on his MXGP debut. “I had two decent motos, made no mistakes and learnt a lot. This was my first race in the MXGP class on the FC 450 and everything was new for me. I have to take this experience and continue working to become a better 450 rider. The races in this class are a lot more intense and also the starts are massively important for each moto. I’m happy we took the decision to come here in Argentina and I’m motivated to get back to work as soon as we return to Europe.”