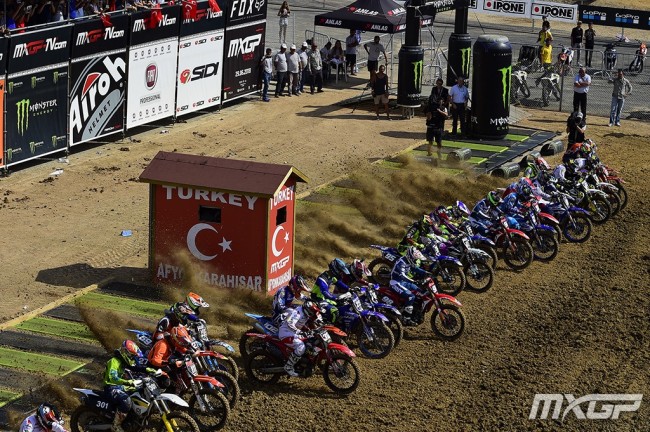 American, Thomas Covington has been knocking on the door for an overall win the last few months and finally it all clicked together for the Rockstar Husqvarna rider in Turkey.

In the first moto, once both the KTM riders collided with each other that sort of gifted the win to Covington but he’ll take it! Covington rode great in the second moto as he led for thirteen laps and looked like he was going to take his first ever 1-1 in his career. However, after some pressure from Jonass it forced him into a crash and he slipped back to third but it was still good enough to take the overall. Turkey seems to be a good place for American’s because Zach Osborne won the last MX2 GP there in 2009!

It was looking like a disastrous weekend for Pauls Jonass after colliding with his title rival, Jorge Prado.  Jonass could only remount in sixth whilst Prado finished in third, more points lost! To make matters worse, he picked up a sore knee in the process.

A determined Jonass was eager to end the weekend on a high and was pressuring Covington the entire second moto, he just couldn’t find away past the America. When Covington dropped it though he ended up clinching the win and Prado had a bad moto finishing seventh. It means Jonass actually gained six championship points on Prado which he will definitely take, especially after the first moto disaster. With two rounds and four moto’s remaining only twenty-four points separate the pair, there’s still hope yet!

After missing out on the podium during the last two GP’s, Thomas Kjer Olsen got back on the box with a third overall.  The Dane rode solid in the first moto to come home in fifth but would have wanted an improvement in the second moto.

Improve is what he done as he came home in second and just over three seconds behind the race leader – that’s a bit more like it! Olsen is a really good rider and it’s never much of a surprise to see him on the podium but can he start to add wins to his name? That will be the next challenge for the Husqvarna rider.

It’s not always easy getting a 2019 bike towards the end of the season but Ben Watson is doing a good job developing and improving the bike. The last few weeks he’s been a bit off what we’ve been used to seeing from him this year but Turkey was an improvement.

Watson ended up finishing fourth in both the moto’s but can be very encouraged with the second moto. He didn’t get the best of starts but set the fastest lap of the race to show he had the speed to run right at the front.

It hasn’t been the best of seasons for Dutch talent, Bas Vaessen. However, Turkey was definitely an improvement and Vaessen will come away from the GP happy that he’s made good progress.

The first moto was solid for the 114 Motorsports Honda rider as he came home in twelfth but he would have wanted a top ten in moto two. That’s exactly what he done too as he finished ninth in the second moto. With his home GP coming up next he’ll want two top ten results in front of his home crowd in Assen.

A lot was expected of Simone Furlotti this year as moved up from the EMX250 championship after finishing second in that series last year.  However, the transition into the MX2 World Championship isn’t always easy.

Furlotti picked up a wrist injury earlier in the season and it’s been affecting his riding. The Italian showed good progress in Turkey though which will please him. A 10-12 scorecard meant he ended up twelfth overall. He will look to enjoy the last two rounds of the series this year as he ages out of the championship in 2019. He’ll need to make a decision about whether to move up to the 450cc or not.