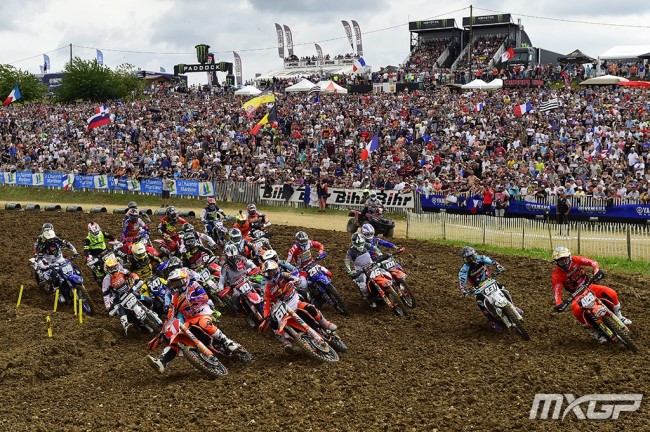 After getting beat by Pauls Jonass at Matterley Basin, the French GP was a different story as Jorge Prado bounced back in style. A 3-1 scorecard was enough to give the Spaniard the overall victory. However, even better than that, with Jonass having a bad day, Prado has closed up the championship chase to just sixteen points.

We’re now at the half way point in the series and things are hotting up for the championship battle, sixteen points in it with twenty moto’s still to go is nothing! The series heads to Ottobiano this weekend and both riders excel in the sand so it could be a great battle between the Factory KTM’s yet again this weekend.

This season hasn’t gone according to plan for Thomas Covington mostly down to his knee injury but France was more like it for the American. The weekend couldn’t have started any better as he won the qualifying moto to go into the main races with plenty of confidence.

Covington didn’t disappoint on race day either as he won the first moto around the technical French circuit. The Rockstar Husqvarna messed up his start a bit in the second moto but still came back strong for third which meant he ended up second overall. When Covington first came to GP’s, this sort of track would have been a bit of a nightmare for him but now it’s his strength, it goes to show hard work really does pay off.

Young talented Belgian, Jago Geerts is just a joy to watch around technical tracks. Geerts is currently having to deal with exam stress in school but you can tell his happy place is when he puts his legs over his Kemea Yamaha.

Due to focusing on school, Geerts doesn’t really ride the hard pack tracks but you wouldn’t think it when the track gets technical as he excels in those tough conditions. The Belgian took a decent start in the first moto and worked his way from ninth to fifth but had the quickest lap time of the race. In the second moto, he started second and kept the gap to Prado respectable as he only ended up three seconds behind him at the finish. That’s a battle we could get used to seeing in 2019. Geerts will only continue to get better when he’s able to focus on motocross full time, I can’t stress how good this kid really is – we are only scratching the surface with him!

At the start of the season things were going great for British talent, Conrad Mewse. However, the Brit has been dealing with personal issues lately which has clearly affected him on the track. The Hitachi KTM UK looks to have got things back on track though with a much better performance in France.

Mewse went 7-9 in the moto’s to secure eighth overall and after a few tough GP’s that should do his confidence the world of good. The Brit will hope to build on that performance in Ottobiano this weekend, there’s no doubt that Mewse has the talent to be a consistent top five guy.

After racing the EMX250 Championship last year, Zach Pichon decided to step up to the MX2 World Championship for the 2018 season in order to learn as much as possible from the best MX2 riders in the world. Pichon scored six championship points heading into his home GP but he had his best moto yet in front of his home fans at Saint Jean d’Angely.

Things were going well in the first moto as he was battling in the top fifteen before he collided with Calvin Vlaanderen meaning he didn’t pick up any points. However, it all clicked in the second moto as Pichon ended up an impressive fifteenth position. He’s done it once so he’ll want to keep breaking into the top fifteen as much as possible before the season ends.