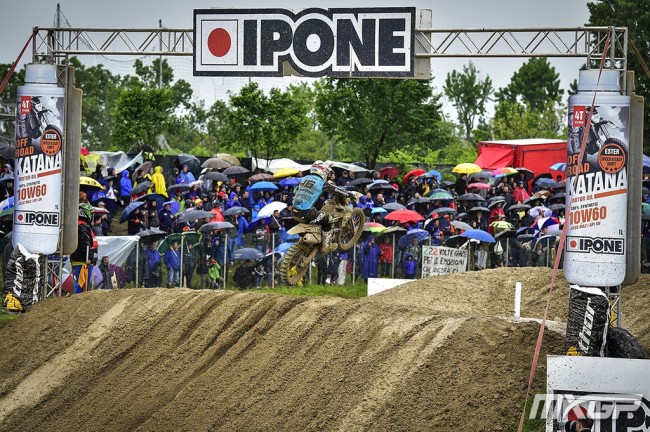 Jorge Prado: Another perfect weekend for the Spaniard who is now only seven points behind Thomas Kjer Olsen for the lead of the MX2 world champion. Prado didn’t look fast with his calculated and smooth style but he gets the starts and and seems to be able to adjust his pace to what is required when anyone behind him ups the pace.

Prado, underlining his technical proficiency, said despite the track being so difficult- he actually enjoyed riding it! “After a month off it was good to come back and get on top of the podium; for the confidence also. I felt really good here from the beginning and it was important to make good starts today: that was the key of the race, as well as staying on two wheels! I enjoyed the second moto a lot. It was really nice to ride that track. It is a place where you need to get the rhythm and let it flow and roll. I could make it happen today. It is very difficult to stay at this level and not make any mistakes and good starts every time: it’s tough. I need to keep concentrating and catch the lead.”

Davy Pootjes: A podium has been a long time coming for Davy Pootjes who was once the next big thing in MX2 GPs and had a multi-year factory contract with Red Bull KTM. But injuries every season derailed that momentum and pushed the dutchman down the pecking order and it is only now that he is able to get consistent results with his speed.

Pootjes has been good all season and at Mantova two strong rides on a tricky track showed his new maturity as well as his speed to earn him a very well deserved podium with 4-4 finished netting him third overall.

There could be even more to come now he has the confidence back!

Mitchell Evans: The Australian is really impressing this year. Whatever the country, track or weather conditions he is proving his is the real deal. A calm head with the versatile skills to cope with world championship racing, Evans has been a great signing for 114 Motorsports Honda.

On one of the most difficult tracks of the year in the wet and the dry, Evans was very competitive and just missed the podium with fourth overall. He is now eighth in the world championship and with it being his debut season and on a non-factory team plus relocating to a new continent and racing the best riders in the world, Evan has done and amazing job so far.

When you see Mitchell Harrison’s results in his first two GPs, a good rider who had top five speed in the US Nationals in the last two years, you can see just how hard the transition is adapt to the world championship from your national series and it underlines just how good Evans has been this year in being able to adapt to every new situation on and off the bike that he has faced.

Bas Vaessen: It has been a difficult last seven days for the Hitachi KTM UK fuelled by Milwaukee squad with Conrad Mewse getting injured at the British championship, leaving Bas Vaessen as the sole member of the team at Mantova,

But despite the extra pressure, Bas rode to the occasion to put in his best GP moto performance for two years and back up a first moto fifth with an eleventh in race two for eighth overall.

Vaessen always shows glimpses of his potential and this was one of those days but what made it more impressive was the fact he was under more pressure than he had been all year and was carrying the entire team’s hopes on his shoulders and he still went out and delivered the results.