Who impressed: MX2 in Russia! 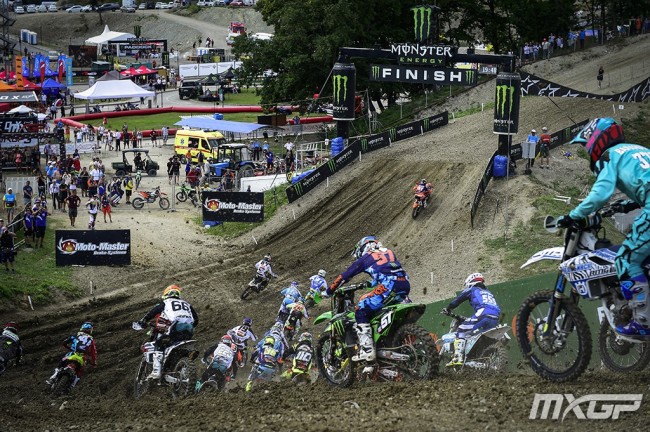 Pauls Jonass: Just how good has Jonass been this season? Another GP and another weekend were he gains points on his championship rival, Jeremy Seewer. Jonass didn’t even win a moto this weekend but still came away with the overall victory. A second and a third in the moto’s was enough to win the overall and extend his points lead in the championship to forty-five points.

It would take a brave man to bet against the mentally strong Latvian not to win the championship at this point as long as he can avoid injury.

Brian Bogers: That’s more like it from the Dutchman! He tends to start the season slowly and after round nine in France sat twelfth in the championship standings. Considering he finished sixth in 2016 and missed three rounds due to injury his results this year haven’t been good enough for his standards. However, in Russia he looked more like his old self.

Even before the rain came, on Saturday he looked good and should have been fifth but he crashed on the last lap to end up in sixth which was a good gate pick. He ended up sixth and second in the main races on Sunday to clinch a podium with third overall. Quite remarkably in the second moto he was the only rider to finish on the same lap as Jeremy Seewer! Bogers should be battling for plenty more podiums during the second half of the season as he certainly has the ability.

Alvin Ostlund: Since moving up from the EMX250 series and his rookie MX2 World Championship year behind him things haven’t been plane sailing. The Swede clearly has talent as we saw him battle with the likes of Pootjes and Hsu in the EMX125 class, he also finished fifth in his rookie EMX250 year  before making the step into MX2 the year after.

He had his career best result in Russia with a superb fifth overall, he went eighth and sixth in the moto’s as the muddy conditions suited his smooth style. He will be hoping for a similar result in normal race conditions. With plenty of sand coming up and improved confidences after a good result the Kemea Yamaha rider might just be one to keep tabs on.

Ben Watson: Another rider that isn’t a stranger to the muddy conditions is Brit, Ben Watson. The Hitachi KTM UK rider took to the conditions like a duck to water. In the first moto, he put in a good ride for twelfth position but would have been looking for more in moto two.

The second moto was going great for the Brit as he was as high as fourth but unfortunately he crashed with two laps to go which cost him a top five. He had to be happy with seventh position which meant he ended up tenth overall. That is still big progress for the Brit as staying injury free this season he is able to improve every week. He will be hoping to become a top ten regular, if he can do that then the recently turned twenty year old might attract some interest for 2018.

Iker Larranaga: After missing five rounds of the series due to injury, Iker Larranaga made his return to Russia and it was well worth the trip. The 8Biano Husqvarna rider secured fourteenth and ninth in the moto’s for eleventh overall.

Considering that’s his first GP back it’s a very good result, he will be hoping to build on this and like Watson become a consistent top ten rider.

Bas Vaessen:  It was a very impressive first moto for the Dutch rider as he finished fifth but bike problems in the second moto ruined his chances of a good overall finish. The Dutch rider is rumoured to be out the door at Suzuki next year so will be looking to impress during the rest of the year to secure a good ride in 2018.

David Herbreteau: It was the French rider’s best MX2 result as he finally secured a top ten finish in moto one. The second moto didn’t go quite as well as he ended up fifteenth but he made progress this weekend. The French rider clearly has talent and will be hoping for plenty more top ten finishes in the second half of the season, he certainly has the potential to do that in hard pack.