Who impressed: MX2 in Germany 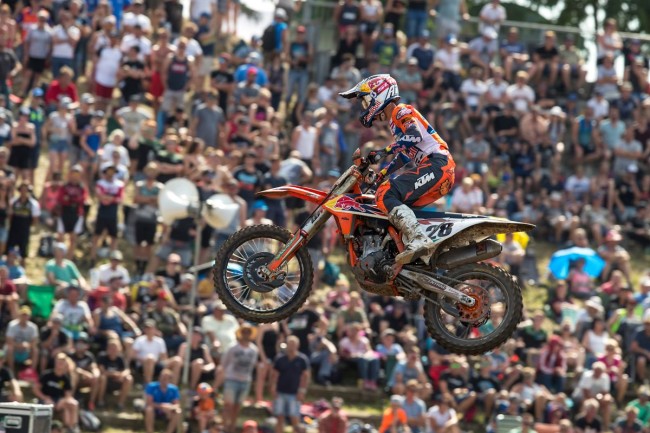 Tom Vialle: The young Frenchman was in superb form in Germany going 2-3 in what was his best performance of the year. His technical style and good starts suited the rutted circuit in Germany and he was able to fight hard in both motos.

“A really good weekend for me and a good turnaround because I didn’t have a great feeling on the bike yesterday. Today I had two solid starts and races. The track was very hard: it wasn’t so fast but with really deep ruts and I liked it. I have been going step-by-step with my confidence and feeling this year and I’m really happy,” commented the Frenchman.

Vialle has been very good this year in his rookie season but Germany also showed he is capable of even more!

Mathys Boisrame: The EMX250 champ has been coming on strong of late on the Assomotor Honda but this was a huge breakthrough ride for the tough Frenchman in Germany. He isn’t as technical as Vialle but he has a lot of corner speed and fight in him and that showed in a tough second moto when Boisrame finally found a way by Vialle for second place and to get his first ever Grand Prix podium.

The joy he showed crossing the chequered flag demonstrated just how difficult it is to get on the box in MX2 but Boisrame has kept plugging away this year and deserves to get some reward in what has been an up and down rookie season so far.

Jed Beaton: It’s been a really tough start for Beaton in his first year as a factory rider with injuries preventing him getting any momentum but he showed a glimpse of what he was capable of in Germany with two strong rides going 6-5.

Beaton has the skills to be even better but this should help his confidence and if he can get better starts more consistently he should be a up there more often in the second half of the season.

“I’m really happy with the way things have gone this weekend,” said Beaton. “To get sixth overall is another very important step forwards. I felt like both races were pretty similar really, just with a fall in the first moto that cost me some places.

“It’s been a while since I’ve been racing with the guys near the front so it’s just good to be back racing there. It’s a really positive way to the end the GP. To be hitting some good form mid-way through the season is great. I’m looking forward to the overseas races now, and hope I can build on today’s results.”

Morgan Lesiardo: It’s been a struggle for the former EMX250 champ in the MX2 World championship the last couple of years with Lesiardo changing teams and seemingly not quite having the confidence at times that he can compete at this level. He almost became the forgotten man.

But a top ten in Germany should change all that! Lesiardo has great skills on the bike and is very smooth, something that probably helped him in the ruts, but it’s nice to seem him show his true potential at GP level and hopefully he can kick on from here!