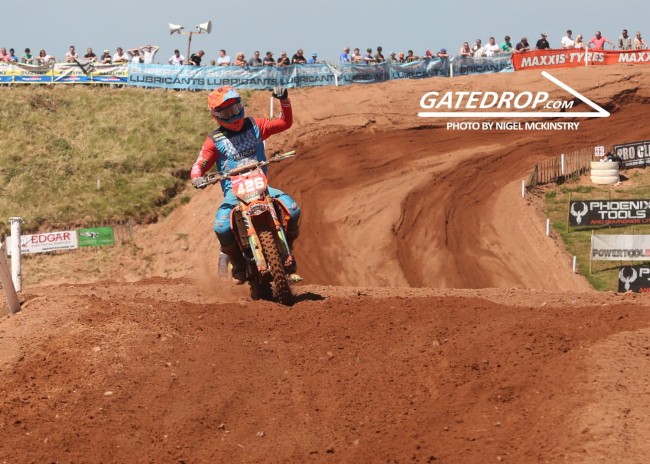 Conrad Mewse – What a performance by the Hitachi ASA KTM man! Mewse dominated the opposition all day, even when he didn’t get the start in race two he stormed through the top five like a knife through butter. Mewse was simply carrying more momentum around the track than everyone else and it showed in the lap times. Mewse showed the Irish fans the level of an elite GP rider and no doubt there were many converon the way home about his stunning performance.

Mewse puts it down to just having fun on the bike: “ To be honest it’s so nice to come and ride a rough sand track, it was so nice. I was just having so much fun, throwing whips and loving life.”

Josh Gilbert – This guy is really good to watch. Really smooth and really fast, Gilbert is now a fully fledged member of the Buildbase Honda team following Josiah Natzke’s departure and his podium performances are justifying the move. Gilbert came through the field impressively in race one and took second in race two, he is on the level of the best MX2 riders Britain has to offer this year except maybe that man Mewse. Gilbert has been riding a couple of GP rounds too recently which has no doubt helped with his intensity and pace and at Desertmartin you could see why he has been successful at getting some points on the world stage.

Brad Todd – The JK Yamaha man is getting stronger and stronger since his comeback from a neck injury at a winter supercross. Todd battled in the top six all day and looked strong throughout both motos. He isn’t quite there yet to challenge for the top three but he isn’t far away now and a podium is sure to be a realistic target for Todd now for the rest of the season.

The local men – Jason Meara and Glenn McCormick have some superb battles in the Irish and Ulster championship and on Sunday they brought that speed to the British championship and battled again in the second moto! Meara would get the better of Glenn to finish 11th with Glenn right there in 12th to give both their best finishes at this level. Glenn had come through the field after a crash on lap one to 17th in race one with Jason starting mid-pack but still pulling through to 13th, with the local crowd getting behind both riders.