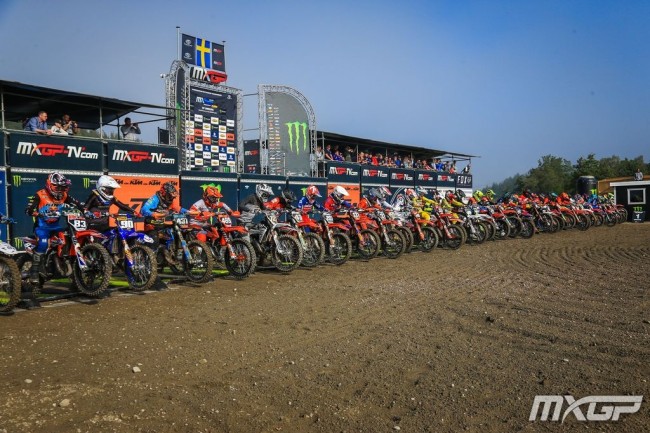 What a season it’s been for Italian talent, Mattia Guadagnini. Coming into the final round of the EMX125 series he’d already won the 125cc Junior World Championship but he done the double by clinching the EMX125 title in Sweden. It really has been the perfect season for the Maddii Husqvarna rider.

Guadagnini made sure he didn’t do anything stupid in Sweden and had two good races. A 3-3 was enough to bring home the title and when he looks back to 2019 in the future he’ll have a lot of fund memories. In 2020 he’ll now make the step to the EMX250 class, don’t be surprised if he’s a front runner right away – he’s that good!

Young French talent, Tom Guyon missed out on both titles this year which he’ll be disappointed about. He shouldn’t be too upset by his speed though as that certainly wasn’t the problem.

At the final round in Sweden Guyon won the overall to end the season and his 125cc racing days on a high. Despite not having a title to his name this year he was really fast. He’ll now move up to the EMX250 series and hope to get revenge on Guadagnini.

The last few rounds could hardly have went much better for Simon Laengenfelder as he really stepped up his riding. The WZ KTM rider won Lommel and ended up second in Uddevalla. When it comes to the most improved rider, it’d have to be Laengenfelder because even though he showed some good pace in 2018 consistency was a problem.

After such a good season Laengenfelder will believe in himself more and with another good winter under his belt should be even stronger in 2020. With Henry Jacobi getting injured for the MXoN, the German’s could do a lot worse than turn to Laengenfelder!

Starting out the season in the EMX250 class was Meico Vettik but perhaps he made the jump a year too soon so he decided to do the last few rounds of the EMX125 series again.

It took Vettik a while to get to grips with the two stroke again but he ended his season on a high in Sweden as he ended up sixth overall – his best result of the season. The young Estonian will hope to build on that performance in 2020.

One rider we aren’t really used to seeing in the top ten is Samuel Nilsson but the Spaniard rode really well at Uddevalla as he clearly gelled well with the track.

Before the weekend Nilsson’s best result was an eleventh place finish in a moto but he’d only managed that once. In Sweden he had his best round to date as he finished eleventh in both the moto’s which was good enough to secure eighth overall. That’ll do his confidence the world of good heading into the off-season.