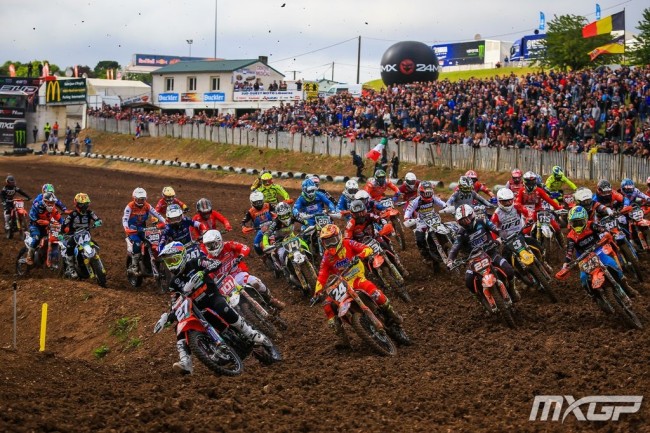 A home GP can be stressful for a rider but Tom Guyon showed no signs of that as he brought his “A game” to Saint Jean d’Angely. Coming into round four, Guyon had only beaten Guadagnini in one race but he made it three times after the weekend by going 1-1.

Perhaps we shouldn’t be surprised because Guyon is in great form at the moment. He was able to win the last round of the French Elite series on his 125cc beating the likes of Teillet, Soubeyras and Benistant on their 250cc machines – impressive! Guyon has now got the championship gap down to twenty-seven points and he’ll want to carry on with this momentum.

In a recent interview with Mike Gwerder, he stated, “My goal is to get into the top 3 in the EMX, the expectations are quite big but everything is possible”. Just a few rounds later and he’s secured his first EMX125 podium by going 4-4 to secure third overall.

The improvement the Swiss kid has made in just a few years is pretty incredible. To think he didn’t even qualify for one round two season’s ago. Clearly he’s very determined and has put in the hard work required. Having Didi Lacher as a coach was clearly a good step too.

At round three of the series, Eddie Jay Wade secured his first EMX125 podium of the season and after a difficult start to the season would have wanted to have another positive weekend in France. Clearly his podium has give him a lot of confidence as he performed really well again at Saint Jean d’Angely.

Another podium wasn’t to be as he just missed out by going fourth overall. A bad start in the second moto cost him another podium but he came through the pack to ninth and was very strong in moto one coming home in second. He’s jumped all the way to ninth in the championship which is encouraging after a difficult start to the season – he’ll want to get into that top five before the season is done.

Sometimes rookie season’s don’t work out and we saw that happen with David Braceras last year. It’s not always easy making the move up from the 85cc to the 125cc and the level of EMX125 is very high. However, this year we are seeing a different Braceras.

France was really good for the young Spaniard as he secured his first ever top five overall. It’s a big step in the right direction and he looked comfortable running the pace at the front. Good starts might be key for him to do the same again. The young Spaniard works with Joel Roelants and the progress now looks to be paying off.

Last year didn’t go according to plan for Gerard Congost as he picked up an injury which ruined his season. The Spaniard missed the first two rounds of the series this year and made a return to racing at round three. It can be hard coming into a season that way but it hasn’t fazed Congost.

A great first moto saw Congost finish in an impressive sixth position. In moto two he got a bad start as he was buried outside the top twenty but he came back to fourteenth to secure eighth overall. He will be hoping for plenty more results like that as he gets back up to speed after missing the opening two rounds of the series.