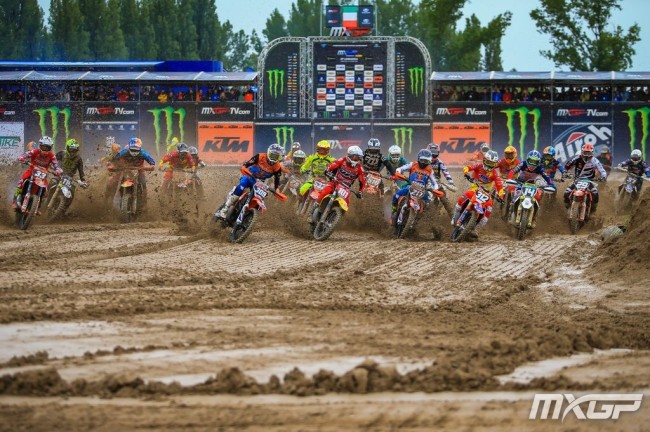 Mattia Guadagnini: It was another perfect weekend for the young Italian who didn’t disappoint his home crowd in Mantova. The Maddi Husqvarna rider had a new look this weekend as the team decided to bring out a special edition bike and gear for their riders to celebrate Choidi’s title with the team 20 years ago.

Guadagnini looked the part and dominated both moto’s which had two very different kind of tracks, he’s showing his versatility this season. After only three rounds he’s already opened up a thirty-eight points gap in the championship standings – you wouldn’t bet against him for the title now if he can stay fit for the entire season.

Simon Laengenfelder: Last season the young German had some really good riders but struggled with his consistently – something you need to get on the podium. However, the young German now with the WZ KTM team has clearly went away and worked really hard over the off-season.

It was a great season for Laengenfelder as he secured second overall going 2-7 in the moto’s for the first podium of his career. After a really bad start in the second moto he had to work really hard to work his way through the pack and seventh under the circumstances was a good ride. Now he has a podium to his name he’ll want more as the season progresses.

Eddie Jay Wade: Another podium first as Eddie Jay Wade had a great weekend on his F4E KTM. The Brit had a disastrous start in the first moto as he as buried outside the top twenty at the end of the first lap, but he battled hard to finish twelfth.

Fortunately, Jay Wade was able to take a much better start in the second moto as he gated out in fourth which give him the perfect opportunity to show us what he could really do. The Brit ended up making two moves to come home in second to secure the last step on the podium. This will do his confidence the world of good after a tough start to the season, so he’ll be hoping to put that fully behind him.

Guillem Farres Plaza: Last time out at Trentino, Farres Plaza surprised with a strong fourth overall and he proved in Mantova that the result was no fluke as he had another strong weekend. This time out he secured another strong fifth overall which shows his consistency which is important in the EMX125 series as so many riders are of a similar pace.

As the season continues, the young Spaniard will hope to get himself on the box as he hasn’t been far away the last two occasions. With Jay Wade getting on the podium and Farres Plaza securing fifth overall the F4E team will be very happy with their weekend – it’s not every day you get two riders in the top five.

Kjell Verbruggen: After a really strong rookie season last year, lots was expected from the young Dutch rider this season, but he didn’t have the best two rounds of the season, perhaps too much pressure on his shoulders?