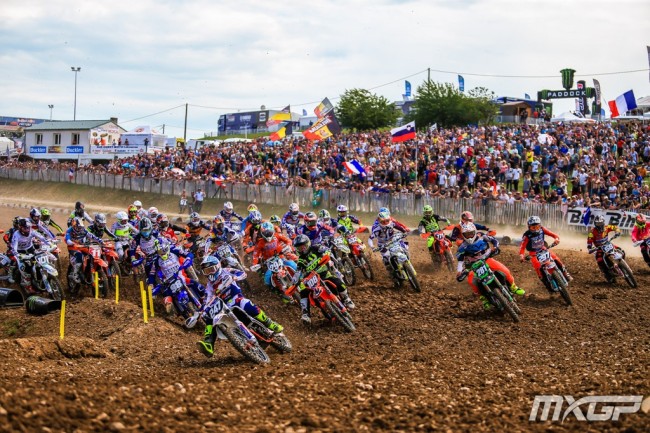 At the last round of the EMX125 series in Germany, Mattia Guadagnini secured his first EMX125 overall victory and now it seems he’s got the winning feeling that he can’t stopping winning. The Italian did the business yet again in France which is his second overall win in a row.

It wasn’t looking good at the start of the first moto as Guadagnini got a bad start outside the top ten, at the end of the first lap he was in eleventh. However, the Maddi Husqvarna rider stayed calm and didn’t panic. He ended up working his way up to fourth which was a good ride after a bad start. Conditions were totally different for the second moto as an overnight thunderstorm hit the circuit which meant it was a mud race. A better start was required in such tricky conditions and he didn’t disappoint as he was sat in fourth at the end of the first lap. On lap four he took over the lead and from then on never looked back, he looked extremely comfortable despite the tough conditions. The second moto win was enough for the overall win and right now he’s the man in the class! Guadagnini will be hoping to keep these performances up and will want even more wins before the end of the season.

The French crowd didn’t get a French winner like they wanted but Thibault Benistant was impressive nonetheless. Especially during the first moto as the French talent looked untouchable, he won the first moto by nearly twenty-five seconds. During the tough second moto, it looked like Benistant was going to bring home a solid fifth but then he got stranded on his final lap and it looked like he wouldn’t get on the podium.

However, even though he couldn’t finish the race as he had completed eleven laps, more laps than a number of the riders that did finish the race, it meant he was still classified as sixth in the race. It meant the MJC Yamaha rider ended up second overall which must have been a big relief. It was also a good weekend in terms of the championship for Benistant as Hofer couldn’t finish the second moto, thirty points now separate them in the championship chase.

Heading into the French round, Florian Miot hadn’t been having the best of seasons and certainly would have been looking for more. Miot had only managed to pick up eleven points during the first rounds.

However, that all changed at the weekend as Miot ended up standing alongside Benistant on the podium. It meant there was two French riders on the podium which would have pleased the French crowd. A sixth in the first moto was a good start to his weekend but the second moto was even better as he crossed the line in third and right behind his brother! Miot has now jumped up from thirty-fourth in the championship to twentieth, he’ll be hoping for more results like this during the final three rounds of the series.

Kiwi talent, James Scott has recently signed for the F4E KTM team to get himself back into the GP paddock after competing at a few rounds of the EMX150 series in the past. Scott’s weekend got off to a disastrous start after only putting in the twenty-second quickest lap in his qualifying group which meant he needed to go to the LCQ to try and make it to the main races.

Fortunately, Scott led every lap in the LCQ race to progress into the main races but as a result he’d have a bad gate pick. Despite the bad gate pick, Scott got a great start in the first moto as he was sat in second. He’d eventually end up in fifth which was a good ride and he’d have learnt a lot battling at the front. The same can’t be said for his second moto start as he was buried down the pecking order – outside the top thirty. However, the conditions really suited him and with riders dropping out like flies, Scott was able to work his way up to an impressive fifth. He just missed out on a podium but he’s certainly knocking on the door and will want on the box at some stage.

It looked like Elzinga would comfortably be on the podium as he was sitting in a strong second position during moto two. However, with three laps to go he was the latest victim of the mud and had to abandon his Yamaha. Despite being three laps down on the race winner, he still classified as fifteenth and meant he was fifth overall. Elzinga’s speed for just being back was impressive and he should only continue to get better. Based on his French performance you’d think he’ll secure at least a podium before the end of the season.