Who impressed: EMX125 in Latvia! 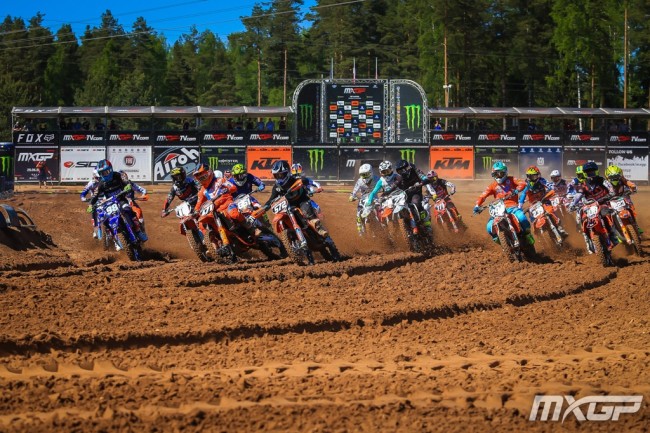 We might only be three rounds into the EMX125 Championship but it’s already hard to bet against the talented, Rene Hofer. The young Austrian was a rookie in the championship last year and finished an impressive fifth. Coming into this season he was a heavy favourite for the EMX125 but that put more pressure on his shoulders.

We are now seeing the young Factory KTM talent thrive under pressure which is encouraging for the youngster. One of his weaknesses last year were starts and that is still an area he can improve in as his starts weren’t great in Latvia. Hofer wasn’t happy with his first moto as he ended up third with Dankers and Benistant pulling away from him. However, he was much improved in the second moto and brought home the win to secure his second overall win of the season. Hofer has now opened up a thirty-four points gap in the championship chase.

Young Czech talent, Petr Polak has showed us glimpses of what he can do in the past but during his time competing in the EMX125 championship he hasn’t been the most consistent. However, the JD 191 KTM rider has clearly worked really hard during the off season and he’s turned himself into a front runner in the series.

Polak started the first moto in eighth but worked his way up to a solid fourth which he’d have been happy with. However, the second moto was even better as he finished an impressive second and it meant he secured his first podium in the EMX125 series with a second overall. Polak didn’t have enough for Hofer in the second moto but the season is long and if he continues to improve then a win before the end of the season isn’t totally out of question. Polak has now moved into third in the championship and considering he was outside the top twenty last year it shows just how much he’s improved.

The first moto of the weekend couldn’t have gone much better for young French talent, Thibault Bénistant. The MJC Yamaha rider got a good start as he sat in second but after four laps, Benistant made his move as he passed Emil Jonrup for the lead.

Benistant was under intense pressure pretty much the entire moto from Dankers but he dealt with the pressure well as he focused on his own race. Benistant held on for the race win and that’s his first EMX125 race win of his career, he’ll be hoping it’s the first of many! Unfortunately, a dreadful start in the second moto ruined any chance of the overall but he worked his way up from seventeenth to seventh. It was a good weekend for Benistant but he’ll be hoping an overall victory is just around the corner.

Young German rider, Simon Laengenfelder was perhaps the biggest surprise of the weekend! The Husqvarna rider failed to even qualify for the first round in Valkenswaard but he’s used that as motivation to really improve. He ended up an eleventh overall at round two in Arco di Trento but he improved yet again at the weekend in Latvia.

Laengenfelder seemed to really love the track, in the first moto he started in ninth but worked his way up to an impressive sixth which was his best ride of the season so far. However, the second moto was even better as he grabbed the holeshot and led for the first eight laps before Hofer made his move. The young German won’t be used to leading races but that should really help him and the fact he ended up third in the moto should help his confidence. Laengenfelder ended up missing the podium but fourth overall is a huge step in the right direction, with his home round taking place next weekend he’ll be all out for that overall podium.

It was a superb weekend for young Swedish rider, Arvid Lüning as it was by far his best EMX125 performance of his career so far. The KTM privateer got his season of to a good start in Valkenwaard by securing fourteenth overall but he only picked up one point at the second round.

Clearly the young Swede was determined to put a tough second round behind him and he did exactly that. Lüning ended up ninth in the first moto as he worked his way through from fourteenth. The second moto went even better for him as he got a great start in third. He rode really well and only lost one spot to cross the line in an excellent fourth position to end up fifth overall on the day. That will help Lüning with his confidence so he’ll be hoping to build on that result as the season progresses.

There’s no doubt that Raivo Dankers has bags of talent as he’s a 65cc and 85cc world champion but in the 125cc series we haven’t saw the best of him just yet. However, he’s started to ride really well over the past few weekends and in Latvia he almost put together a moto win.

Dankers hounded Benistant for the entire moto but just couldn’t find a way past so had to be content with second. Unfortunately, the young Dutch rider didn’t have a good start in the second moto and had a lot of work to do. Buried down in sixteenth, Dankers worked his way as high as eighth but crashed on the last lap which was a shame. It meant he ended up sixth overall but he definitely had the speed for a podium in Latvia.

Two riders that deserve shout outs are Silver Action rider, Andrea Bonacorsi who ended up an impressive eighth overall which is a step in the right direction. Creymert KTM’S, David Braceras secured his first points in the championship as he ended up eleventh overall.