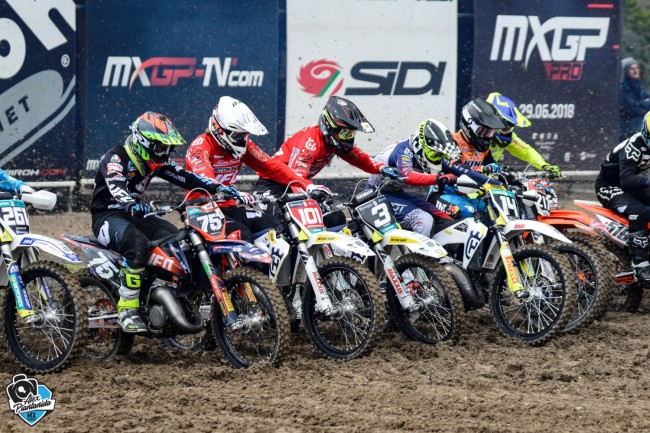 Kay de Wolf: It’s hard not to be impressed with the young Dutch talent. He’s made the step from the 85cc to the 125cc look extremely easy. Being from the Netherlands and at such a young age it’s impressive he’s already a well rounded rider when it comes to sand and hard pack which will help him in the future.

De Wolf might have missed out on a podium at his home GP in Valkenswaard but he was able to secure third overall in Arco to stand on the EMX125 podium for the very first time – a nice memory. He’ll be looking for plenty more podiums as the season continues.

Guillem Farres Plaza: Coming into the season the Spanish rider was a bit of an unknown but he clearly had something because the F4E KTM team decided to sign him for the 2019 season.

In Arco, Plaza displayed the talent he has as he went 3-8 in the moto’s for fourth overall to just miss out on a podium. He clearly likes the hard pack tracks – if he can improve his sand riding he might be one to watch out for.

Oriol Oliver: There’s no doubt the young Spaniard has stepped up his riding in 2019. Having said that starts really let him down in Arco. In the first moto, he came from outside the top thirty all the way to tenth in what was a great ride.

The second moto Olivier finished a strong fifth and almost passed de Wolf on the last lap so it shows he has podium speed – he just needs to improve those starts and a podium isn’t far away.

Alberto Barcella: The first round of the series didn’t go to plan for the young Italian as he only picked up two points in Valkenswwaard. Riding in front of his crowd in Arco went much better for him though.

The Max Bart KTM rider secured a very solid seventh overall which he’ll be pleased with. That’s one of his best rides in the EMX125 series of his career and if not then the best! He’ll be hoping for more results like this as the season progresses.

Liam Everts: It’s hard not be impressed with Everts as he could still easily be racing the 85cc. Fourteenth overall at round one in Valkenswaard was a good result but he did even better in Arco.

Seventh and eleventh in the moto’s was enough for ninth overall – his first top ten EMX125 overall result. As he gains strength and adapts to the 125cc he should only continue to get better and better.