Webb on making a bad day good at Detroit 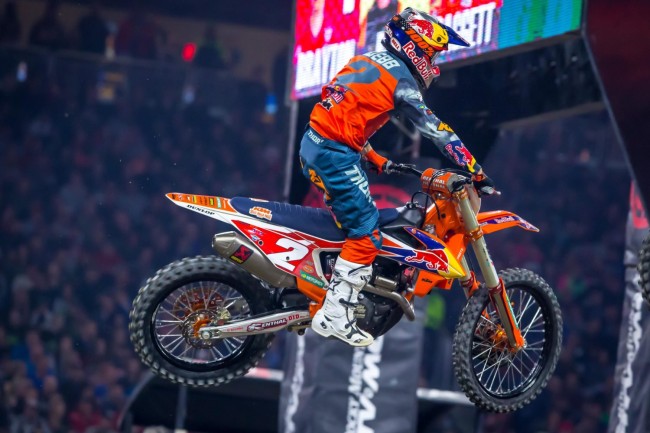 DETROIT, Michigan – The Red Bull KTM Factory Racing Team went to battle on Saturday for Round 8 of the AMA Supercross Championship in Detroit, Michigan. After three intense Main Events, 450SX points leader Cooper Webb was able to maintain possession of the coveted red number plate with solid 6-2-1 finishes on the night.

In the 250SX East division, Troy Lee Designs/Red Bull/KTM Factory Racing’s Jordon Smith moved up a notch to second-place in the championship standings after an impressive runner-up performance in Detroit.

Webb had a slow start to the day, qualifying ninth and heading into the first of three Main Events with a less-than-favorable gate choice. However, Webb powered his KTM 450 SX-F FACTORY EDITION to a decent start in 450SX Main #1 as he settled into fourth on the opening lap. He fought for a top-five position through the first half of the race but he ultimately finished sixth in race one. In Main #2, Webb shot off the line to capture the holeshot and early lead. He led for the first five laps before engaging in battle with Eli Tomac. Despite all efforts, Webb wasn’t able to catch Tomac for the lead, where he finished second in race two. In Main #3, Webb got a top-five start and moved into third early on. He stalked the front-runners for a few laps before capitalizing on their mistakes to claim second. From there, he challenged the leader and eventually overtook the position with six laps to go. Webb was able to hold off a hard-charging Blake Baggett late in the race to edge out the race-three victory and claim second overall for the night.

Webb: “Today didn’t start off the best, I was struggling with the track earlier in the day and qualified ninth. I went to the Main Event with not-the-best gate pick for the Triple Crown but I got a good start in the first one. I just made a lot of mistakes and didn’t ride that well but we, as a team, regrouped and figured out some things to get better. Looking back, I wish I would have done a little better in the first one and I could have potentially gotten the overall but that’s racing and it’s good to be on the podium with a second place, and to get another Main Event win is nice.”

Meanwhile, Webb’s Red Bull KTM teammate, Marvin Musquin, struggled with starts throughout the evening. In Main #1, Musquin got off to an eighth-place start and he fought inside the top-ten after a mistake sent him off the track. He was able to salvage ninth in the first race. In Main #2, Musquin got a fourth-place start and he battled with the lead group for the first half of the race. However, while setting up a pass for third, the rider ahead of Musquin slid out and with nowhere to go, Musquin ran into him and went down. He quickly remounted and made a charge in fifth, eventually reclaiming fourth late in the race. He made a last-ditch effort to go after third on the final lap but he came up just short, finishing fourth in the second Main Event. In Main #3, Musquin got another top-ten start but this time he was able to charge his way up to fourth, finishing just off the podium for race three and the Triple Crown overall.

Musquin: “It was definitely a tough day of not getting very good starts. I wish I would have started a little bit better, at least in the top three. It was hard to pass with a lot of intensity out of everyone in the first few laps of each moto and I made a big mistake and jumped off the track in the first moto and that cost me a lot. The riding was good tonight, I clocked some really good lap times during each of the three motos so I know the speed was there but unfortunately it was hard to get good results. There was a lot going on in those three Main Events and it’s frustrating but we never give up.”

Rocky Mountain ATV/MC – WPS – FLY – KTM’s Blake Baggett had another solid night, riding his KTM 450 SX-F FACTORY EDITION to a fifth overall with 4-11-2 finishes. Baggett had a standout ride in Main #3 as he led almost half of the race before dropping a position to second on lap seven.

Just one week after sustaining a wrist injury while racing, Jordon Smith fought through the pain to put forth an impressive ride at the Triple Crown. Smith had great starts all night, putting himself in favorable positions in each of the races as he consistently battled up front. With 2-2-4 finishes, Smith secured second overall to climb his way into second-place in the 250SX East Championship after three rounds of racing.