Webb on Cianciarulo: He cracked, I didn’t! 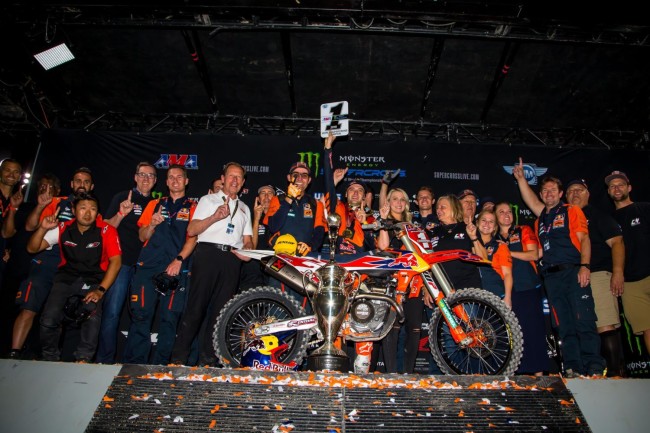 New 450 supercross champ, Cooper Webb, had no sympathy for Adam Cianciarulo’s crash that cost him the 250 West title at Las Vegas.

When asked to comment on the Cianciarulo’s crash and if it affected how he rode his main event, Webb who was schoolboy rivals with Cianciarulo said bluntly: “he cracked, I didn’t.”

I have interviewed both and both riders are nice guys. Webb has often given off that brash, cocky air but in a one to one conversation he is quiet, polite and down to earth, as is Cianciarulo who is probably the more confident and outgoing of the pair.

To give Webb’s comment a bit of context, you need to understand the history they have. Webb and Cianciarulo grew up together in the schoolboy scene, both winning a lot of races but it was Cianciarulo who seemed to get the lions share of the publicity even if Webb showed he could beat him at times when they raced.

At Webb’s first visit to Bercy I spoke to Cooper and his dad with his father saying that one US media member in particular was Adam’s “publicist.” And he felt that Cianciarulo wouldn’t move up a class to race Cooper in case he got beat.

While that may or may not have been accurate, it shows the perception that Cooper was not getting the respect and credit he deserved despite success as an amateur.

As an outsider it’s hard disagree with that as it seemed it was Cianciarulo who was set to be the next guy, while Webb wasn’t given that same expectation.

To put it simply, Cianciarulo was expected to do exactly what Webb has done, and that was never more starkly highlighted on that night in Vegas. It was Cooper Webb living the life Adam was supposed to, taking the coveted 450 supercross crown as Cianciarulo crashed out of the 250 title and is still searching for his first pro championship. That, mentally, has to be very tough for Cianciarulo to experience.

It is expected that Cianciarulo will now move up to the 450 class next season, meaning we will get to see the two rivals go head-to-head again and Webb’s comments certainly won’t be forgotten by Adam!

On his own capacity to produce under pressure, Webb said: “It helps having a really good programme and guys to ride with, riding with Marv, Zach and Jason helped a lot.”

“Not a lot stayed the same,” he continued on his changes that led to championship glory, “obviously the family but it was a big change, where I lived, bike, team, mechanics, everything about my programme changed and it 1000% payed off. It was good to, after having a terrible two years, to start over almost and be surrounded by great people in all aspects of the training partners to the team and the vibe you are around makes you a better person and definitely a better rider.”

Now Webb has another challenge, to beat Eli Tomac outdoors! Webb revealed he believed Jeffrey Herlings was the fastest motocross rider in the world, so he won’t be intimidated by Tomac the defending US motocross champ, but with limited testing time and a supercross title, it will be interesting to see just how prepared Webb is for outdoors, only two weeks after achieving a lifetime goal of being 450 supercross champion.