Webb on another win at Atlanta 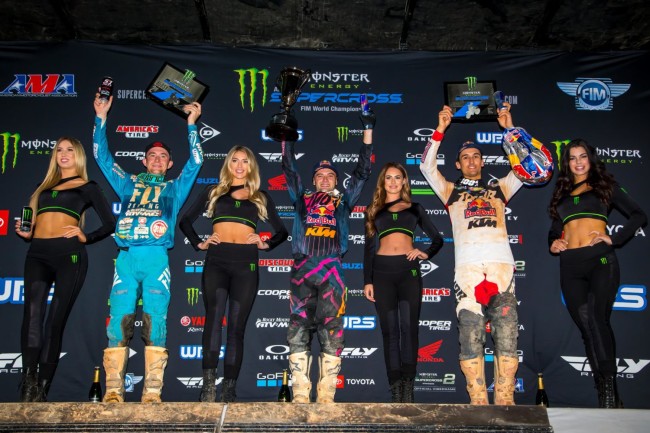 Webb further extended his championship points lead to 13 after another top night in the premier 450SX division, claiming his fifth victory of the season in Atlanta. After qualifying fourth, Webb captured a third-place start in 450SX Heat 1 and battled behind his teammate Musquin for most of the race. On the final lap, Webb made a move past Musquin to overtake second for a solid transfer into the Main Event. As the gate dropped for the Main Event, Webb powered his KTM 450 SX-F FACTORY EDITION to the holeshot and early lead as he worked hard to break away from Musquin back in second. Webb rode his own race and managed to hold off the hard-charging competition to lead from start to finish and ultimately secure the win by a little more than one second.

Webb: “Atlanta was a great night for me. The Main Event was awesome! I got a holeshot and led from start to finish. I had a lot of pressure from Marvin and also a lot of pressure from Baggett, so it was cool to stay comfortable, stay loose and get another win. The fifth win of the year is incredible and I’m just blessed to be in this position at the halfway point, it’s exciting.”

Musquin, the second-place qualifier, got off to a second-place start in 450SX Heat 1, where he battled in second between KTM riders Blake Baggett and Webb. On the final lap, Musquin got passed by Webb for second, where he took the third-place transfer into the Main Event. Musquin shot off the line in the Main Event and right into an early battle for the lead with Webb. Applying great pressure on Webb, Musquin blitzed through the whoops and accidentally came into Webb, which caused him to almost go down and lose time on the leader. After getting back on-track, Musquin made another mistake in the sand section, which allowed Baggett by for second and he ultimately secured third for the night.

Musquin: “It felt like it was going to be a better race for me – I had a great start so I was running second, which was good but I was eating a lot of sand in the sand section it was definitely tough. I was pushing really hard – I was better than Cooper in some areas of the track, so I was able to really put pressure on him in some areas but then I would go through the sand and I had to go in the main line because it was the safest and the quickest line but you kind of had to follow. I made a mistake and went off the main line and then Baggett got me. At this point, I just could not make the pass on Blake, even though I showed some really good speed. It’s only a third place tonight and I’m not very happy with the result.”

Rocky Mountain ATV/MC – WPS – FLY – KTM’s Blake Baggett won 450SX Heat 1 to put himself into a favorable start position for the Main Event. In the Main, Baggett injected himself into the lead battle early on as he battled behind Musquin in third for a majority of the race. With seven laps to go, Baggett made his way around Musquin where he ultimately secured a second-place podium position.