Webb and Roczen on THAT pass! 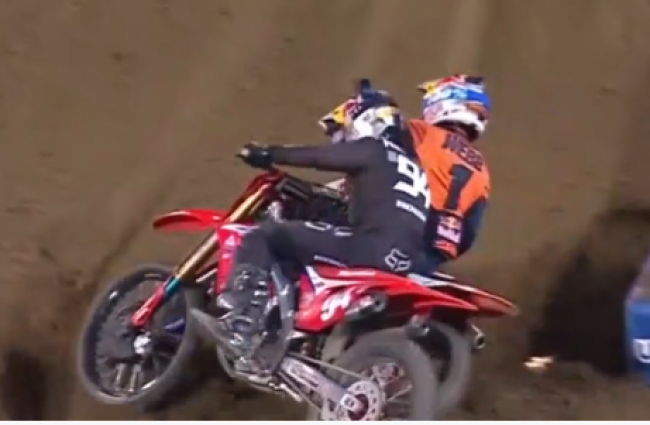 Ken Roczen and Cooper have had yet another clash, but this time the rivals seem to be seeing it as just hard racing!

Roczen, who led for a long time before Tomac passed him, then looked to have second secured until Webb put in a big charge on the last lap and ran it in hard on Roczen on the last turn to nick second.

The German went over the line in third but immediately felt for his foot which had got sandwiched between both bikes in the contact, fortunately Roczen seems to think it’s not too bad.

Webb said on the move: “I was going for it and I killed the last lap honestly. I made a run in the whoops and kinda missed on the only passing point on the track, man we were so close going back and forth there and unfortunately made contact in that last turn but I was really trying to square him up and get underneath. I’m sorry for the contact but we are going for it and I really need to claw my way back in this championship.”

And Roczen was very honest in his assessment of the move and his night, saying:“I’m pumped to get away with a podium finished. It was good points lost which was a bummer on my par. I didnt have it today, even in practice I was just off speedwise. I actually rode really well I thought, towards the end I was just bouncing off some of the bumps, then made a couple of big mistakes with a couple of laps to go and Cooper came in on the last lap which is fine, we are fighting for the championship and it’s a last turn pass. I don’t know if it was from the slam or if my foot got wedged somewhere but definitely a stinger to my foot, I can feel it swelling up in my boot right now, so we will take a look at that later.”

See the pass below:

It’s not the first time Webb and Roczen have came together on them last turn with Webb stealing a win away from Roczen last year and the year before both went down hard with Roczen breaking his hand – it’s always tough racing between Roczen and Webb!