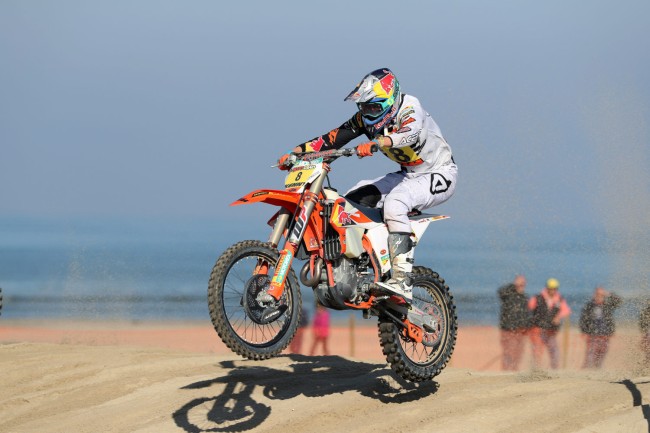 The long, picturesque beach at Scheveningen is normally host to water sports such as windsurfing and kiteboarding but on Saturday 10 November, 1000 riders will take to the sand to contest the sixth edition of Red Bull Knock Out. Following the morning’s heat race, the top 750 riders will go on to contest the two-hour final.

Returning for his third Red Bull Knock Out, Nathan Watson will be aiming for his first win at the event. Runner-up in 2015 and 2016, Watson will be going all-out to claim his first WESS victory of the season. The former GP motocross rider has endured a steep learning curve in 2018, riding many events for the very first time. However, due in part to several strong results in the latter half of the season, Nathan now lies sixth overall in the WESS standings, less than 600 points from the top three. A win in The Netherlands could catapult Watson higher up the championship top-10.

Nathan Watson: “I am really looking forward to the Red Bull Knock Out – in fact, I’ve been looking forward to it since the start of the season. 2018 has been a challenging year for me, I have experienced a lot of new races and have had to tailor my riding to suit them. All-in-all I am happy with how my season has gone but I would really like to finish it off on a high with a win in The Netherlands. I’m quite confident coming into this final event, I’ve got a lot of experience with beach races and have finished second at Knock Out twice. I know it’s going to be tough, but I am eager to get stuck in, give it 100% and hopefully finish on the podium.”

Sitting third in the championship, Josep Garcia will also be hoping for a strong result at Red Bull Knock Out. Competing at the event for the first time, the 2017 Enduro 2 World Champion is still in striking distance of the overall WESS title – if his nearest competitors have a tough race and Garcia takes the win, the title could be his. Since the previous round in Sweden just two weeks ago, Josep has been concentrating on his sand riding technique and is keen to impress at the Dutch beach race.

Josep Garcia: “I have been doing a lot to prepare for this final race of the WESS championship and I’m feeling really good. My speed in the sand has improved and I’m hoping for a strong result on Saturday. I know it will be tough as there will be a lot of sand specialists racing, but if I can find a good rhythm I know that I can challenge for the podium. The last race in Sweden was really tough for me, I had a bad start and was hit by another rider that caused me to lose a lot of time. I was still able to fight back to 12th and was pleased with how I rode. Hopefully at this last round I can have a good, clean race and maybe improve my overall position in the championship.”

Red Bull KTM Factory Racing’s Jonny Walker and Taddy Blazusiak will not be competing at round eight due to injuries. Walker will be at Red Bull Knock Out, aiding the commentary team at the event.

The 2018 Red Bull Knock Out – round eight of the World Enduro Super Series – takes place at The Hague, The Netherlands on November 10.

World Enduro Super Series Standings (After round 7 of 8)