Watson and Geerts on a successful Russian GP 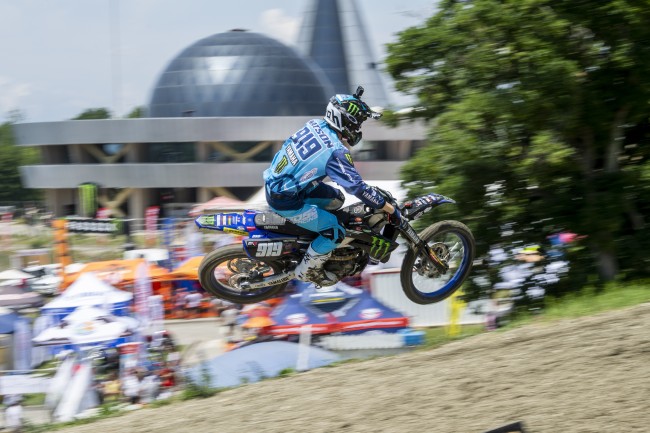 Monster Energy Kemea Yamaha rider Jago Geerts finished third (3+3) in round 8 of the FIM world championship in Orlyonok, Russia. It’s already the fourth podium visit of the year for the Belgian teenager. Ben Watson, who endured the pain in his wrists, finished 7th (10+6) at the seaside venue.

Both Monster Energy Kemea Yamaha riders have good memories about the hard pack track in Orlyonok. Geerts became world champion 125cc in 2016 at the track near the Black Sea and Watson took his first ever GP-podium in Russia last year. Unfortunately, the Brit took a big hit in the qualifying race on Saturday and injured his wrists. Geerts finished in third position, giving him a good gate pick.

Geerts took a great start on his YZ250F in the first race and rode in second position for a few laps. The 19-year-old Belgian dropped to fourth position after being passed by Olsen and Prado, but remained calm and rode smart on the slippery and sketchy track. Geerts, physically very strong, closed the gap with the leaders in the final laps. The teenager was putting a lot of pressure on Olsen, but just ran out of time to pass the Danish rider.
Watson had to come back from far behind (25nd in qualifying) in the first race. The Brit fought hard as always and finished 10th.

Geerts took another good start in the second race, but went too far in the first corner and dropped from third to sixth position. The Belgian immediately went into attack mode: Harrison, Cervellin were his first ‘victims’. And his pass on Sanayei, in lap 7, was timed to perfection. Like in the first race, Geerts started his hunt for Olsen. Jago came very close, but missed the second place by six tenths of a second.

Meanwhile, Watson pushed himself through the pain barrier. Ben was 14th in the first corner and started to pass one rider after another. The Brit finished sixth after a brave performance.

Jago Geerts: “My fourth podium of the year after two solid races. I’m really happy with that. I’m only a bit disappointed about a small mistake in the start of the second race. I was second in the first corner, but went too far to the outside and lost a few places. Without that mistake I might have finished second. On the other hand: I’m  very satisfied with my riding and my physical condition. I was able to close the gap on the leaders near the end in both races. I’m really looking forward to next weekend, to the Grand Prix in Latvia. Kegums is one of my favourite tracks.”

Ben Watson: “I have to be happy with 7th place. I had a really big crash on Saturday. I injured both wrists and didn’t even know if I could ride on Sunday. Luckily, I was able to ride, but trust me: it was not an easy day. I had a terrible gate pick and had to fight the pain. I had to come back from outside the top 20 in both races. I’m really happy with my second race. I moved up from 20th to 6th place, after a lot of passes. Now, I have one week to take a little rest an recover.”

Marnicq Bervoets: “A great result again from Geerts. Maybe he was a little bit too careful in the beginning of the first race and he also made a small mistake in the start of the second race. But he finished very strong in both races and almost caught Olsen on the last lap. Jago is in a good flow at the moment. He needs to keep working hard to maintain that form. Watson had a terrible crash on Saturday and carried an injury in both wrists. Ben was in pain, but showed a lot of determination. His second race was impressive. From 20 to 6, a great result in these circumstances.”