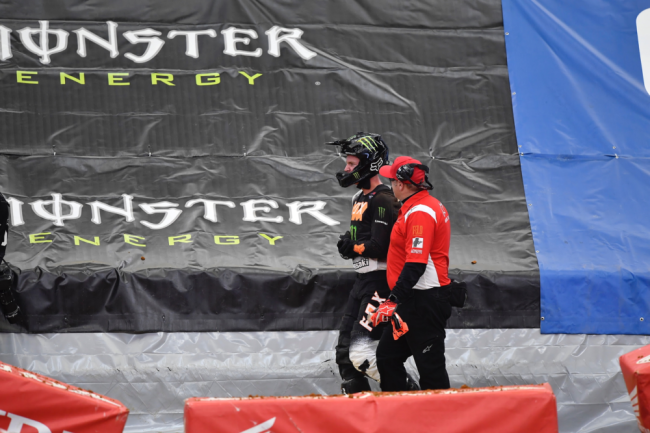 A difficult dragon’s back before a triple took out two of the big six in the 450 class at Arlington as well as JGR Suzuki’s Jimmy Decotis!

The top three 450 men on the night gave their view and none of them like the way it was built, with Roczen saying: “I already saw on press day on track walk that they have five whoops on the dragon back and then the fifth one is the lowest one out of all of them. You hit all four of them then all of a sudden your front wheel goes over the last one and al you do is hit it with the back wheel and it ate up Adam and then, I didn’t see Cooper’s crash but it ate him too. I’ve seen it happen multiple times, but I don’t know what the thought process is behind there because you want the last one to be obviously the tallest one, that’s the whole point of it. Then also they are breaking down because it is soft.”

While Anderson commented: “I also think they are so small that you can go so fast through them and you can get ahead of yourself and obviously we are trying to go as fast as we can and just that split little bounce to get over the top one, obviously it can eat you up.”

Tomac concurred, saying: “I am with these guys, I don’t understand why they build the last one lower than the first four, it seems like they have done it multiple times. You want to sit there and scratch your head. You want to hit the last one but they make that thing low, it’s not good, you see the crashes.”

For Adam Cianciarulo, it happened in qualifying one and meant the factory Kawasaki man would end up with a broken collarbone after getting slammed into the face of the next triple. Cianciarulo is getting surgery but there is no word yet on when he will be back at the races again. The injury is a shame for the impressive 450 rookie who looked ready to get his first win of the year after coming close a couple of times already this season.

Jimmy Decotis also succumbed to the same obstacle and hit the deck hard putting him out for the night.

They say everything is bigger in Texas. @jimmydecotis wasn’t lying. In his own words ⬇️ ・・・ “Unfortunately I won’t be racing tonight in Arlington. I was so close to saving this crash but I got hung up on the side of my bike and my momentum took me straight into the face of the triple. I was able to walk off under my own power but I took a hard hit to my head and after a VERY hard decision I’m going to sit out tonight. Bummed for my whole team, I just want to compete. “life can only be understood backwards but we must live it forward.”

This was all in addition to the huge crash Webb had in race two, but somehow, despite heavy bruising, Webb suffered no broken bones and is planning on racing this weekend!