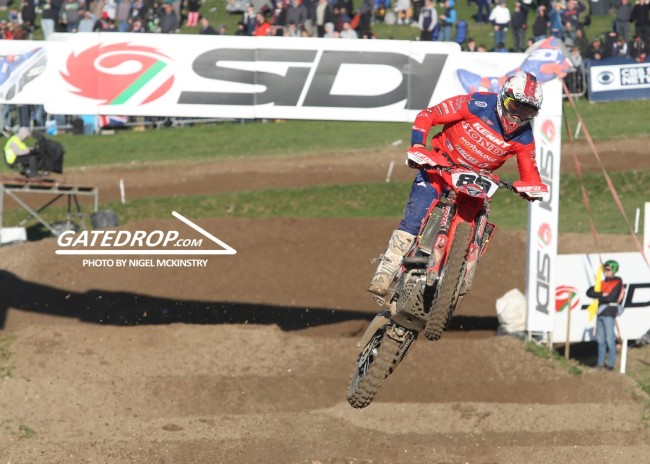 Jeremy Van Horebeek has taken 3rd and 5th place finishes in the first two rounds of the 2019 MXGP series despite entering the championship at the eleventh hour as a privateer with the Honda SR Motoblouz team and using stock CRF450R material. Even though the Belgian has performed well it seems his efforts might not draw extra support from Honda.

The 28 year old is in the initial throes of a career renaissance after some lean and mediocre years with Yamaha and in the distant wake of a defining season in 2014 where he claimed his first (and only) MXGP win to-date as runner-up in the world.

JVH is somewhat scorned after being snubbed by most of the paddock in the depths of last summer and is certainly riding with renewed perspective on his status and that of the sport. Almost rivalling HRC’s Tim Gajser for results and potential after two rounds the inevitable question arises as to Van Horebeek’s potential value for Honda. The irony is that the Belgian receives marginal backing from the manufacturer (HRC are independent as a race division, the rest of the MXGP operation is marshalled by Honda Motor Europe) and is proving the brand’s point in terms of the competitiveness of their stock customer base.

“Mid-February Jeremy and the Honda SR team made the decision that they wanted to go MXGP racing and they did contact Honda Motor Europe for help but at that time there was nothing we could do,” explained Off-Road Manager Gordon Crockard. “The plan for 2019 was signed-off, budgets were agreed and every euro had been allocated. The timing of the request was impossible to respond to. We went to Argentina with this feeling of gratitude to Van Horebeek, Honda SR and Honda France and all the people that put Jeremy on the line. It was fantastic that they were prepared [for the season] but timing was the issue for us and we could only say that we’d support them in any way we could: and that is an ongoing process.”

Crockard, who won 250cc Grands Prix for Honda in 2001, empathised with Van Horebeek’s plight but was also quick to highlight the positivity of the privateer’s progress. “He is doing exceptionally well and I can relate to from my own personal experience as a non-factory Honda rider in my career and taking podiums and winning races,” he said. “So I’m right behind him in terms of what he is doing and the promotion of the customer CRF. Anyone can create that bike and it demonstrates the ability of that product. It helps on two fronts: to the consumer that we want to buy our bikes and also to the rest of this paddock to show that you don’t need the ‘magic bike’. Riders in previous years have complained that they couldn’t get the results because they don’t have factory material. What Jeremy is doing is a great argument against that claim and will really help for future years in dealings with riders.”

While Van Horebeek’s bright run of speed and form is an advertisement for Honda there is also the awkward PR situation of a rider potentially excelling for a brand and then receiving little compensation or assistance for the job he is doing, especially if #89 feels like ‘emphasising’ his privateer status repeatedly in the media. For now at least JVH will have to persist with his lot at Honda SR and the underdog ‘forgotten’ tag seems to be suitably fuelling the fire.

“People can say ‘but you’re Honda: why don’t you have any euros?’ but this is subject of budgets, plans, management. There is nothing we can allocate at the moment but it is not a closed door or subject,” Crockard stresses. “It is wonderful he is doing so well because it helps my case to say this guy is delivering the goods and he should be given support and help. It is an ongoing process that I am working-on internally. This is a new dynamic where a guy has showed up on his own – with his own bike – and is making the MXGP podium; we are continuing to work on it. Would he go any better on a factory bike? We don’t know.”