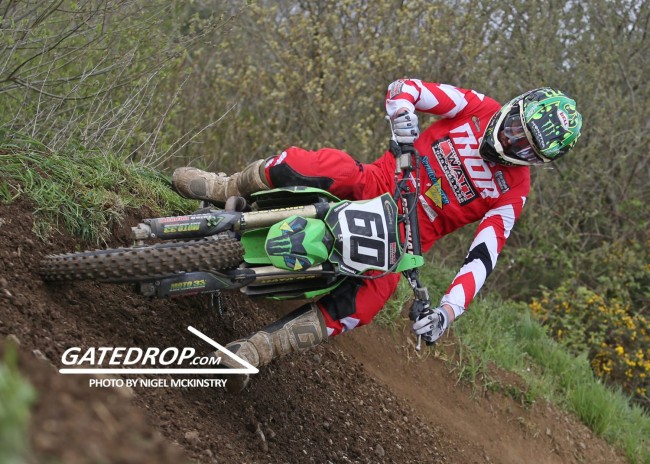 The 2019 Nutt Travel MRA Ulster Motocross stays with the sand at Desertmartin for the now traditional Easter extravaganza at the World-famous circuit.

The Premier MX1 Class sponsored by Banbridge based Adair Building Services produced some superb racing at Claudy in the season opener, with Jason Meara from Loughbrickland on his Kawasaki pipped James Mackrel from Dundonald for the overall although both come to Desertmartin on equal points, Mackrel now KTM mounted courtesy of Edgar Electrical Wholesalers, came away with the win at Tandragee last week in the Irish Champs, so expect fireworks form these two, as well as big brother John Meara on his Kawasaki who dominated race 3 at Tandragee, and of course defending Champion Richard Bird on his five5 motorsport KTM won’t let his title go without a fight, add in riders like Robert Hamilton from Ballymoney on his Risk Racing KTM and Luke Smith on his Yamaha, this will be a real hot cross bun fight.

The Premier MX2 Class sponsored in 2019 by Sports Insure is led by British Championship contender Martin Barr on his Crescent Yamaha, with no racing in the UK on Easter Monday, Martin should start favourite at the Desert, his County Antrim neighbour Glenn McCormick, now Unique Fit Out Husqvarna mounted and after a great run to 8th last weekend in the MAXXIS British will be looking to step up to the challenge of his mentor, on form Dubliner Jordan Keogh will be looking to build on his third place, and also on form in fourth is Limavady man Matthew Loughlin on his Yamaha, and expect to see Jake Sheridan from Dublin at the front as well.

The Semi Expert MX1 Class & MX2 Class both supported by Norman Watt Motorcycles the change on format has encouraged more Semi Experts onto the gate, and the MX1 class is currently led by Jack Daley on his two stroke KTM, with Donegal man Anthony Brown giving chase in second and Aaron Ashton from Ballygowan third, Russell Tannahil and Jamie Mottram are tied for fourth with local man Kyle Farrell McCauley sixth.

The MX2 Class is being dominated by Crossgar teenager Conner Mullan on his KTM, but he is being chased hard by Jack Moore and is quiet Dollingstown man William McBride on his Yamaha, and ex Quad Champion Leon Rogers is fourth on his similar machine, only a point behind is Magherafelt rider Jake Hall.

The Clubman MX1 Class retains Robinson Concrete and is joined by CCM Racing from Dublin is led by Ballyclare man Stephen Mottram on his two stroke, with Colin Gordon & Lee McGrath in close company only a point apart in second and third, and North West riders Roy McGarvey and Ryan Canning fourth & fifth.

Laverty Motocross Clubman’s MX2 Class is led by Ardglass youngster Eoin Duffy on his KTM with Scott Fisher & Callum Hemphill second and third with Aaron Finlay, Matthew Bruce, Conor Devlin & Cian Rogers jostling for the lesser placings but not far off the leaders

The Veterans Class sponsored by Stephen Russell Motocross & Chilltec Refrigeration produced some excellent racing at Claudy, and indeed at Tandragee, currently led by Comber publican Jonathan McBride and Ravarnet man Richard Watt on his KTM on 46 points apiece, third is Laurence Spence on his TM with Ian Moore not too far adrift on his two stroke KTM.

Qualifying will start at 0930 and racing at 1100 on Easter Monday and the circuit will be signposted from the main Desertmartin to Maghera Rd, entry s £5 per adult and under 14’s free, come along and see the most exciting motorsport Championships on the island.