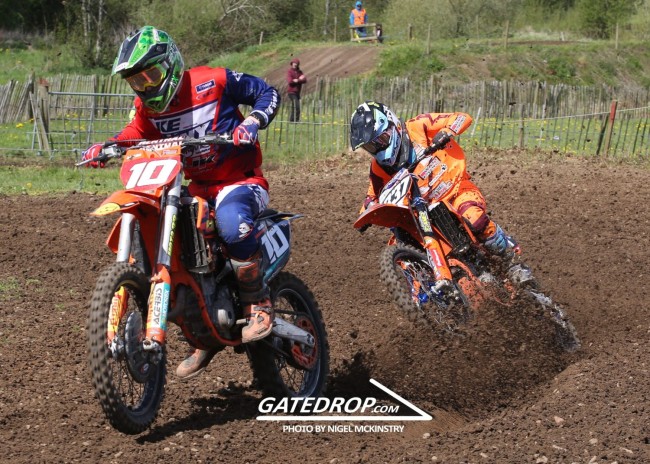 The 2018 Nutt Travel MRA Ulster Motocross Championships moves away from the hard pack of County Down to the sand of the North West at the new to the Championship track at Claudy for the NIMC promoted event.

The Sport Insure Premier MX1 Class Champion Lisburn man Richard Bird the reigning Ulster Champion leads the Championship by an impressive 37 points from Banbridge Risk Racing Yamaha rider Sean Devlin,while up to third is Sean’s cousin John Meara on his Kawasaki, John catching up after a poor opener, the Loughbrickland man will be keen to catch the reigning Champ, although tying with John is Portavogie man Robert Hamilton on his Risk Racing Yamaha, with fifth and sixth also tied on 92 points each, the soon to be married Greyabbey man on his Smoke Vent KTM Craig Browne and Jordanstown rider Jay McCrum.

The Thompson Leisure MX2 Premier Jason Meara from Loughbrickland leads by 13 points from perennial rival Glenn McCormick from Glenoe, while Jasons younger brother Cailum is third 38 points adrift of McCormick he in turn is ten points ahead of Dubliner Stephen Mullaly and Donegal youngster Aaron Gardiner on his Risk Racing Yamaha and Comber man David Russell in sixth, this is a hugely competitive and entertaining class with super racing worth the price of admission alone.

The Precise Protect Semi Expert MX1 Class is led by Ashley Allerton feom Newtownards with Ballymena man Clifford ‘Badger’ Wilson ten points behind, Johnny Presho from Comber is only three points behind Wilson, but 8 ahead of Tony Conlon with Joel Brown and Chris Cully well adrift in fifth and sixth.

The Gortnacarrow Tyre Services in association with Bridgestone Semi Expert MX2 is led by Rhys Graham on 118 points with Nathan Green on 102, Michael McAllister on 100 and Dollingstown youngster William McBride is fourth on 84, Risk Racing Yamaha team mates David Robson and Ben Kennedy round out the top six.

The Robinson Concrete Clubman MX1 is led by six points by Calvin McCorkell from Jordan Wade with Ross Thompson third a long way behind on 71 points against Wades 125, fourth fifth and sixth are Fintan Fallon, Neill Laverty and Niall McCrum, the battle for the win is between McCorkell and Wade with the rest battling for third.

Laverty Motocross Clubmans MX2   is led by Markethill youngster Scott Bailey from Lurgan personal trainer Ruari Grimes only six pijts separate these two, while hot on their heels is Daniel McFerran only 22 behind Grimes while Callum Hemphill  is only a point behind him, fifth is Robert McAuley  with Adam McFaul in sixth.

Racing starts at 1100, entry is £5.00 with under 14’s free, and the circuit is signposted from Claudy Village.