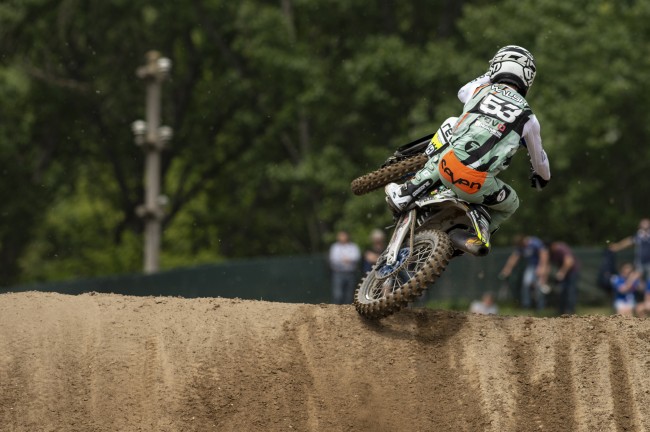 It was a tale of two motos for REVO Husqvarna UK riders Dylan Walsh and Alvin Östlund at the Monster Energy MXGP of Lombardia in Northern Italy on Sunday, round five of the FIM Motocross World Championship.

Both riders struggled in qualification with Alvin going to the line in 20th – two places ahead of his team-mate – and following heavy rain and in appalling conditions on a narrow track neither made it upright around the opening two turns in race one.

Dylan recovered for 19th and Alvin just missed out on the points in 21st but in race two both gated well and showed their class with the young Kiwi coming home in a career-best fifth on his FC 250 and the Swede bringing it home in 11th following a hard-fought 30-minute plus two lap moto.

“The track was very narrow with just the one line. The qualifying race didn’t go well for us but Alvin got a good start in the first moto and then got caught up in a massive pile-up in turn one. Dylan got around but then dropped it in the second turn.

“It was a tale of two races for us and the guys got great starts in the second moto. Dylan rode really well and Alvin narrowly missed out on a top-10 finish – it was a case of just staying on the bike in dreadful conditions.

“So the first race was disappointing but I was very pleased with how Dylan and Alvin performed in the second moto. Conditions like this bring out the best and the worst in people and the team worked amazingly well. We’re making steady progress and I feel that when we go to Portugal next weekend we’ll show what we are capable of doing.

“The bikes are easily fast enough and if they can get the starts and stay upright around the first turn then both guys have got what it takes to get the results. This weekend was a lottery with the conditions but they kept pushing and were rewarded with decent results so I’m happy.

“I’m pleased with where we are at this point in the season, we’re making steady progress and the confidence is coming with both Dylan and Alvin.

“I have a lot of confidence in both riders. Alvin’s been around for a few years now and is as professional as they come but this is Dylan’s first full year in the MX2 world championship so for him to be running top-five so soon – especially after getting injured at Valkenswaard – is an amazing achievement.

“The team is working hard and pulling together and I couldn’t be any prouder of them. We’re working very well,”

“The first race was pretty tough after I crashed on the start and then had another crash but the second moto was much better.

“I got a good start and found my rhythm and rode how I know I can ride. I was happy with that.

”There are still another 13 rounds to go and we’re building every time we race. My bike’s great, I feel fit and healthy and I’m very happy with the team.”

“I got a good start in the first race but I crashed in the first corner and then had another two crashes so it was not the best moto for me and I was outside the points. It was very wet on the side of the track which made it hard to pass.

“The second race was okay and I didn’t crash at the start and finished 11th. I know I have the speed but I need to put two races together. It is a long season and I have time to do this.”