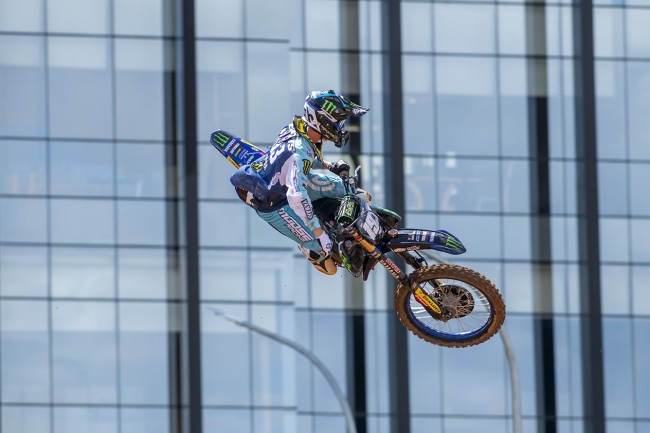 Bad luck keeps haunting the Monster Energy Kemea Yamaha Team. Jago Geerts had a horror crash in the first race, but responded with a fourth place in the second race at round 11 of the FIM World Championship MX2 in Palembang, Indonesia. Ben Watson had to withdraw after warm up, due to pain in his broken hand.

Ben Watson decided to travel to Indonesia, only 13 days after surgery on his broken hand. His goal: trying to get as many points as possible. The Brit fought through the pain barrier during the qualifying race on Saturday and finished tenth in very hot and humid conditions. A great result considering his injury. Unfortunately, the pain and the swelling on his hand got worse on Sunday. Watson pulled out of the morning warm up and wisely decided not to line up for the rest of the Grand Prix.

Battered and bruised
Jago Geerts, who only finished 12th in qualifying, clearly felt better on the red clay based track on Sunday. The teenager took a mediocre start (8th) in the first race, but immediately gained some positions. The Belgian was on the move and passed Vlaanderen for fourth place, but lost control over his YZ250F at the end of the wave section. Geerts crashed at high speed into the face of the next jump. Luckily, he didn’t suffer any severe injuries.

Despite feeling battered and bruised Geerts showed his talent and determination in race two. The Belgian took the lead in the second lap after passing Prado and Vialle. The youngster was outstanding for almost the entire race. Five minutes from the end, Geerts lost the front on the entry of the same wave section, crashed and fell to fifth position. Jago fought back one more time to finish fourth and tenth overall. Despite the DNF in the first race Geerts is still third in the championship standings.

“Of course I’m disappointed with the result, but I’m glad I can leave this place without a severe injury. My crash in the first race was a big one. I was thrown over my handlebar at the end of the wave section. I went down hard, at high speed. I feared a rib injury, but luckily I only had some bruises and scrapes. Despite being battered and bruised I felt better in the second race. I was leading until I made a mistake and went down. That was a big bummer. Now I have to focus on next weekend. A new race and new chances.”

“It was a difficult weekend as expected. During the qualifying race I was ok, my mind was not so focused on the pain. I was pleased to finish 10th. I woke up Sunday morning and didn’t have a good reaction after racing on Saturday. I tried to ride in warm up, but it was just too much for me to handle. I was putting myself in too much risk with being unable to control the bike properly. It’s disappointing to sit out another GP, but I have to be smart and just take it on the chin.”

“A hard day at the office. Ben had a pretty good result on Saturday, but we knew we had to wait and see how his hand would react. Unfortunately, the pain was worse on Sunday morning. After the warm up we decided not to take any risks. Jago was ready to attack the leaders when he had a horrible crash in the first race. He was really lucky to escape without an injury. I was impressed by his reaction in the second race. It’s a pity that he made one small mistake. We’re going to have to bite the bullet now.”